Beatles release ‘All You Need is Love’ 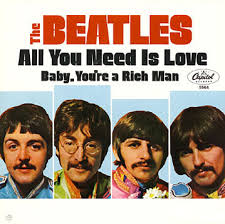 If any song illustrates the metamorphosis of The Beatles from pleasant pop band to complex – perhaps over-complex – musical innovators it is All You Need is Love, released the month following their already ground-breaking Sgt Pepper’s album .
Written for the first global satellite broadcast, One World, which went out on June 25 1967, All You Need is Love was recorded both at Abbey Road and Olympic Studios, with what are thought to be 58 takes required to record the many parts, the varied instrumentation, and all the backing vocals. The song, written by John Lennon though as ever credited to Lennon and McCartney as per their agreement, had a simple and for some revolutionary message, a slogan even.
But if the lyrics were simple the instrumentation, arrangement and even time signature were not. The song used an orchestra of 13 players with a conductor, Mike Vickers, and the band played a variety of instruments themselves – George playing violin as well as guitar, Paul on double bass and bass guitar, John on Harpsichord and banjo. The arrangement, supposedly to provide an international flavour in keeping with the broadcast, included snatches of Bach, the Marseillaise, Greensleeves, Jeremiah Clarke’s Prince of Denmark’s March, and Glenn Miller’s In the Mood – which as it was still in copyright landed the group in trouble and ended in an out of court settlement it is said. And the time signature for the verses was 7/4 followed by 8/4 and back to 7/4, though the chorus is in more conventional 4/4 time.
Released as a single (with Baby You’re a Rich Man on the B side) in the UK on July 7 1967 it was number 1 by July 19, spending three weeks at the top of the charts.