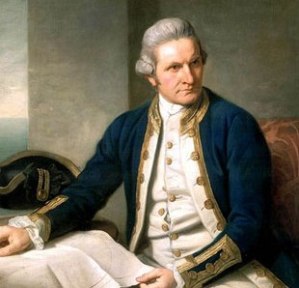 It had been thought that Cook, after returning from his second voyage of discovery, had done with exploration. His retirement was provided for by giving him the position of Captain in Greenwich naval hospital. He was made a Fellow of the Royal Society , a huge honour for a one-time farm-boy and shop assistant. He was a national hero. But when at the home of head of the Board of Admiralty Lord Sandwich he was asked for his advice on choosing the man to lead a new voyage to find the North West Passage, Captain Cook could not resist the challenge.
As with his previous voyage Cook was to command the HMS Resolution, and his first lieutenant on the second voyage Charles Clerke, promoted captain now, was to have charge of HMS Discovery. The expedition numbered 192 men, including the complement of officers.
Given the sensitive and strategically important nature of the voyage’s goal, it was obscured by the public being told the aim was to return home the Tahitian Omai, who had accompanied Cook back to England from his second voyage. This was indeed a real task, and the British government, mindful of the trade possibilities with the islands of the Southern Ocean, sent various farm animals and seeds for food plants as gifts and inducements to cooperation for the islanders.
But it was the fabled North West Passage that was Cook’s new target. He eventually made his way via the Pacific to Alaska, mapping much of the coastline there, by so doing bridging the gap between the geographical knowledge of the Spanish in the south and the Russians in the north. He made repeated attempts to sail through the Bering Straits, without success – a blow to his pride and to his fortune, for there was a prize on offer of £20,000 to whoever found the passage.
Cook was to die three years into this voyage, killed on the Hawaiian Islands 14th February 1779 , his fame assured by both his past achievements and the drama of his violent end on a far distant shore.