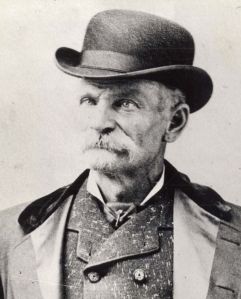 “Please Throw Down the Box!”From behind a tree on the Funk Hill mountain pass in Northern California, Charles Boles jumped in front of a Well Fargo stagecoach brandishing a shotgun. Boles, who wore a long duster and covered his head with a flour sack with eye holes, politely commanded driver John Shine to hand over the strongbox in his carriage.

He then called out, “If they dare to shoot, give them a solid volley, boys.” Shine looked out and saw six guns pointing at him from behind trees and boulders. Terrified, he handed over the box, which contained $160.Shine soon returned to the scene of the crime and found that the guns were still pointing at him. He called out to the unseen bandits, but received no reply. He nervously walked towards the bushes and found that there was nobody there. There were only tree limbs aligned to look like guns.

Boles had robbed his first Wells Fargo stagecoach. The gentleman bandit who would later become known as “Black Bart” would rob at least 27 others in his life, all without ever firing a shot.

Sources in this Story

Charles Boles, or Bolles, was born in 1829 in either New York or England. He served in the Union Army during the Civil War and later left his wife and daughters to move West.

Boles was not a typical outlaw. He was unfailingly polite to the coach drivers and claimed never to have loaded his shotgun. He also never took money from passengers. “Legend has it that when a petrified woman passenger threw down her purse, he valiantly returned it,” says the Sierra Nevada Museum. “Supposedly, with a tip of his derby, he told her, ‘Thank you, madam, but I don’t need your money. I only want Wells Fargo’s.’”

After his fourth robbery, on Aug. 3, 1877, he left a short poem, one of at least two he would leave during his career. It read, “I’ve labored long and hard for bread, for honor and for riches, but on my corns too long you’ve tred, you fine haired sons of bitches.” It was signed “Black Bart the P08,” a nickname that would make him famous.

Boles likely took the nickname from a serial in the Sacramento Union called “The Case of Summerfield,” which featured a villain named Black Bart who robbed Wells Fargo stagecoaches.

Black Bart became popular with the public as he robbed an estimated 28 Wells Fargo coaches in eight years. In total, he stole an estimated $18,000, “a princely sum that could keep him in the just-short-of-elaborate style he preferred,” according to HistoryNet’s John Stanchak.

He was finally caught in 1883, after he was shot during a robbery at the same curve of Funk Hill where he had robbed Shine. He fled the scene but left behind several personal items. Wells Fargo detective James B. Hume found the items, including a handkerchief bearing the mark “F.X.O.7.” Hume traced the handkerchief to a San Francisco laundry where they were able to identify its owner as being Boles, who was living under the name Charley Bolton.

Black Bart was sentenced to a six-year term in San Quentin Prison, but was released after just four years for good behavior. Though he disappeared after his release, he has remained a Western legend ever since.