Start of World War I 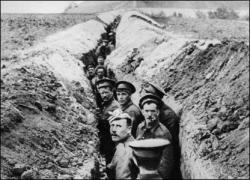 It is possible, if frivolous, to argue that WWI began because some foolish Serbian reservists in small steamships managed accidentally to cross to the Austro-Hungarian side of the river forming the border of their two countries on June 26 1914, the Austrians firing at them in retaliation for their trespass. This was the final spark that led to the ageing Austrian Emperor being persuaded to declare war on Serbia on July 28, the first of a series of declarations and counter-declarations that rapidly led to a global conflict. But the causes of WWI are notoriously complex; going back some would argue to the Treaty of Vienna after the defeat of Napoleon at Waterloo .
Some desired war – domestic politics in both France and Germany meant that governments welcomed the idea of a unifying cause to distract the left in Germany and right in France from upsetting the political status quo. In Russia, though on the surface the Tsar was in firm control, a noble cause for the motherland was equally interesting to the authorities. In Serbia and the rest of the Balkans, the idea of uniting the southern Slavs had huge force.
The vision of Slav unity drew Russia towards Serbia, and meant that powerful men in the Serb military arranged the terrorist assassination of Archduke Franz Ferdinand in Sarajevo to move events on, and with his death create a giant gesture of defiance and purpose.
The arms race over the previous decades was another undeniable factor. The Dreadnoughts of the European navies symbolised the belief in coming conflict if you agree with one view, or the desire to avoid it by deterrence if you follow another. AJP Taylor propounded the theory that once events were set in motion, the detailed mobilisation plans that were meant to be a deterrent actually trapped the proponents into action.
Nationalism, economic and imperial greed – Trotsky famously revealed the plans to split the territorial proceeds of a putative war drawn up by Britain and Russia beforehand – national hatreds, resentment at slights and old conflicts, all were added to the mix.
Perhaps we can say that the war happened because everyone expected it to happen, and were confident of victory when it did. Britain did not enter the war officially until several days later, but preparations were well in train when those rather comically faulty navigators crossed to the wrong side of the stream and provided the excuse, or justification, for war.