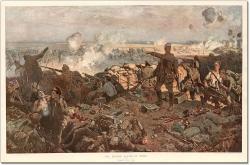 The political and logistical situation before the Third Battle of Ypres (generally referred to now as the Passchendaele offensive) had changed compared to that obtaining before the Somme offensive, justifying an offensive of some sort, at some point on the line. Parts of the French army had mutinied, and this was in danger of spreading. The German submarines operating from Belgian seaports were severely weakening the war effort, and British morale at home. The Russian army seemed likely to pull out of the war at any moment, freeing German forces from the Eastern Front to reinforce those in France and Flanders.
But if the big picture had changed, Haig ’s tactics and utter lack of flexibility had not. Until his hand was forced in 1916 he had planned some sort of campaign in Flanders. With the Somme now over he could return to his previous plans.
As ever this was to be ‘one more push’ to defeat a German army that Haig was convinced, for no concrete reason, was on the very verge of collapse. As ever the advance was signalled by ten days of bombardment by heavy guns, which as ever made little impact on the ability of the German army to face the British, Canadians, ANZACS and South Africans when they finally walked towards them on July 31, at 3.30 in the morning. The moment of advance was of course notified to the enemy by the finish of the barrage.
If the Allied artillery had failed to do any serious damage to the German pillboxes facing them, it had changed the terrain, making it impossible for tanks to cross no-man’s-land, churning up the earth and mixing it with the worst rains for 30 years until even the infantry struggled to move in it. Hundreds possibly thousands of Allied soldiers drowned in the liquid mud.
Prime Minister Lloyd George had been against what he correctly expected to be another Somme, but he dared not replace Haig, or could see no alternative. It could be argued that any officer with an IQ higher than double figures could have done a better job. When the casualties mounted Haig clutched at the straws of insignificant territorial advances time and again. Not until the village of Passchendaele, of no strategic importance but giving Haig a spurious claim to some sort of victory, had finally been taken on November 6 would he call a halt to what he was sure was the decisive cracking of the German army on the Western Front.
Haig’s magnificent push cost over 500,000 Allied dead, wounded, missing or captured, but his face was saved. Two Allied soldiers died for every inch the line was advanced. Just a few months later the troops needed to maintain a hold on the salient were withdrawn to reinforce more important sectors of the Allied line, and the Germans walked back in.