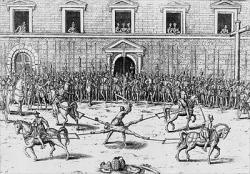 The first person in these islands known to have suffered the prolonged agonies of being hanged, drawn and quartered was Dafydd ap Grufydd in1283 , the last true Welsh Prince of Wales made an example of by Edward I . The last was to be the Scottish spy David Tyrie almost five centuries later, again a valuable propaganda device for the government of the day.
At his trial in Winchester Tyrie was found to have been passing secrets to the French. The American War of Independence was still being fought, British forces thus stretched and these islands more vulnerable to foreign attack than was comfortable. It was said that the information relayed by Tyrie was provided by senior figures in the government, so perhaps his horrific death was a way of discouraging such activity without the embarrassment of a trial featuring great names.
Tyrie’s execution was carried out by the shore in Portsmouth. Hanged for 22 minutes so probably already dead he was then beheaded (which we can take it ensured he was). His heart was cut out and symbolically burned in front of him, he was emasculated, cut into quarters and finally buried in the pebbly shore. For Tyrie, however, the indignity was not yet complete: sailors at the event immediately exhumed the four parts of his butchered body and hacked them into tiny pieces for distribution as very grim souvenirs.