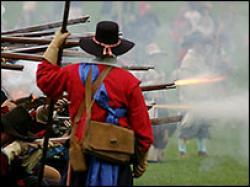 “All England should come in pilgrimage to this hill, once a year,” or so the great American statesman John Adams said of Fort Royal Hill at Worcester. For this was the battle that freed Britain of its monarchy decisively, if only for a decade, after 10 years of Civil Wars . The failure to capture Charles II , however, meant that he was able to return in triumph in 1660.
The death of Charles I signalled an obvious weakening of the Royalist cause, but he was replaced by Charles II, who perhaps had more sense than his father. The new king made his base in Scotland, allying with the Covenanters disappointed at their treatment by the English Parliament. But in September 1650 the Battle of Dunbar proved a signal victory for Cromwell , and Charles opted to move his army south, to try to outpace his pursuit and raise a greater army on his route to London . England was tired of war, however, and the royal cause looked a doomed one. Few join doomed causes.
Thus in August 1651 Charles and his largely Scottish forces found themselves in Worcester, resting before either moving further south, or meeting Parliament’s New Model Army in battle.
Cromwell knew the situation presented him with a chance to wrap up the Royalist rebels for once and all. He hoped too to take the new King. One of Cromwell’s first strategic moves was to send a force of Lancastrians and cavalry from the area of Worcester itself north of the city, to cut off the route of retreat towards Scotland.
So much was in Cromwell’s favour. His force totalled around 30,000, and this included a large number of well-trained, well-paid, well-motivated New Model Army soldiers. The King had between 12,000 and 16,000. Local people helped the Parliamentary force along their route, with food, and even helping carry weaponry and pull artillery at times. Few rallied to the Royal cause. Even those with Royalist sympathies made efforts to stay away, keeping weaponry hidden if they still had such. And Cromwell had more artillery, an arm he used well in the battle.
The Battle of Worcester was fought over a very wide front, stretching from Powick to the south west of the city of Worcester, along to the south east and all along the east side of Worcester to Perry Wood and Red Hill in the north, and even beyond. The Severn cut through the middle of the battlefield, and pontoon bridges across it built by Parliamentary engineers were of great significance in their victory – Cromwell at one stage of the battle had crossed from east to west, and then returned to support his forces under attack from a Royalist sortie.
In a way the battle was a series of linked skirmishes, at least initially: various crossing points of the Severn and Teme were stormed by Parliament, forcing the defenders back by weight of numbers. When Cromwell supported this drive Charles, watching from the Cathedraltower, saw a small chance to unsettle the enemy, and sent forces out – one led by him attacking Red Hill another under Hamilton hitting the Parliamentary force holding Perry Wood a little further north.
The sally was initially successful, but never looked like defeating the Roundheads. Attack slowed to standstill, then turned to retreat and soon to rout. The Royalist troops ran for the city, but in the chaos many perished. Leslie, commanding the reserve cavalry, watched on, not caring to join the doomed fray.
In all Charles lost 3,000 dead, a large part of his force. Almost all of the rest were captured: some 8,000 Scots would be transported as near slaves to the West Indies, New England, and Bermuda.
Charles himself famously escaped, hiding within Boscobel House and in anoak tree there. He learned much from his defeat – he had to wait for the political scene to change, as overturning Parliament was no longer an option. And in his six weeks of flight before leaving the country, disguised, mixing with the common people, he is said to have reached an affinity with them that had previously been alien to the haughty Stuarts.