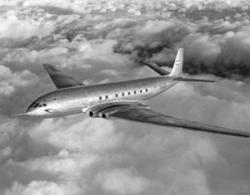 With the skies over the Atlantic nowadays criss-crossed with the vapour trails of jets linking the UK directly with dozens of airports in North and South America it is hard to imagine a time when such a crossing was not only new, but a daring and technically demanding feat.
Though jet aircraft had been developed before WWIIended, in 1950 the technology was still in its relative infancy: the de Havilland Comet had flown in 1949, but was still in the testing stage; the Avro Jetliner project was also live, although it never went into production. Thus it was that the first jet aircraft to make the crossing between Europe and America non-stop were American military craft, Republic F-84 Thunderjets, single-seater fighter-bombers with a far from glowing reputation for reliability.
Happily the mission was only possible because of British technology. Not just Whittle ’s jet engine, but also in-flight refuelling probe-and-drogue equipment developed by Flight Refuelling Limited – indeed the flight was intended to demonstrate the value and practicability of that system, as it did albeit with mixed results.
USAF Col. David Schilling and Lt-Col William Ritchie took off from Manston Airbase in Kent on September 22 1950, in fact their second attempt as the previous one three days earlier had hit snags. They were refuelled over Prestwick , Keflavik and Goose Bay, by Lancaster and Lincoln tankers in the first two cases, and a USAF B-29 in the third. Ritchie had to bail out near the Labrador coast, having run out of fuel because his refuelling gear was damaged in the Keflavik rendezvous and wouldn’t function in the Goose Bay one. He was rescued by helicopter. But Col. Schilling made it, landing at Limestone in Maine. New York had been the original destination, but bad weather forced a change of plans. His flight-time was 10 hours 8 minutes.