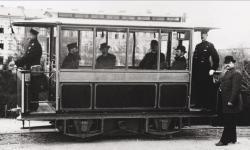 The first electric tram in Britain was not in one of the great metropolitan centres to serve industry and finance, but in the seaside resort of Blackpool , where the burgeoning tourist industry was putting a strain on the town’s transport of horse buses, hackney cabs and landaus.
The inspiration for the revolutionary idea of an electric tramway – others had horse drawn and steam powered trams – came from a demonstration being held in 1884 in The Winter Gardens of an electric railway. The far sighted council, keen on innovations to add to the attraction of the resort, in January 1885 formed a partnership with entrepreneurs which they dubbed The Blackpool Electric Tramway Company, a name from an age when a company title meant what it said.
In those days they worked fast, and the track was laid (and relaid because the first Board of Trade inspection found it wanting) by summer that year. The first two miles of rails ran between Cocker Street and Dean Street on the South Shore, passing Bailey’s (now the Metropole ), The Wellington, and Foxhall Hotels.
Though the grand opening was on September 29 1885, trials of the track with horse-drawn vehicles began earlier in the year, and for several weeks before the official opening passengers were given free rides in electric trams testing the track and power supply – fed from a purpose built power station in Blundell Street.
The first system used a power conduit beneath the street, tapped into from the tram via a plough device, but this was unsuited to the seaside location – sand filled it and broke connections, salt attacked it, and water caused regular havoc, so after a few years of struggles with new versions of the conduit the overhead wire system still in use today was adopted.