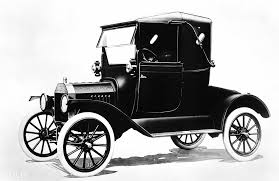 For the first time, Henry Ford’s entire Highland Park, Michigan automobile factory is run on a continuously moving assembly line when the chassis–the automobile’s frame–is assembled using the revolutionary industrial technique. A motor and rope pulled the chassis past workers and parts on the factory floor, cutting the man-hours required to complete one “Model T” from 12-1/2 hours to six. Within a year, further assembly line improvements reduced the time required to 93 man-minutes. The staggering increase in productivity effected by Ford’s use of the moving assembly line allowed him to drastically reduce the cost of the Model T, thereby accomplishing his dream of making the car affordable to ordinary consumers.

In introducing the Model T in October 1908, Henry Ford proclaimed, “I will build a motor car for the great multitude.” Before then, the decade-old automobile industry generally marketed its vehicles to only the richest Americans, because of the high cost of producing the machines. Ford’s Model T was the first automobile designed to serve the needs of middle-class citizens: It was durable, economical, and easy to operate and maintain. Still, with a debut price of $850, the Model T was out of the reach of most Americans. The Ford Motor Company understood that to lower unit cost it had to increase productivity. The method by which this was accomplished transformed industry forever.

Prototypes of the assembly line can be traced back to ancient times, but the immediate precursor of Ford’s industrial technique was 19th-century meat-packing plants in Chicago and Cincinnati, where cows and hogs were slaughtered, dressed, and packed using overhead trolleys that took the meat from worker to worker. Inspired by the meat packers, the Ford Motor Company innovated new assembly line techniques and in early 1913 installed its first moving assembly line at Highland Park for the manufacture of flywheel magnetos. Instead of each worker assembling his own magneto, the assembly was divided into 29 operations performed by 29 men spaced along a moving belt. Average assembly time dropped from 20 minutes to 13 minutes and soon was down to five minutes.

With the success of the magneto experiment, Ford engineers put the Model T motor and then the transmission on moving assembly lines. On October 7, 1913, the chassis also went on the moving assembly line, so that all the major components of the Model T were being assembled using this technique. Ford rapidly improved its assembly lines, and by 1916 the price of the Model T had fallen to $360 and sales were more than triple their 1912 level. Eventually, the company produced one Model T every 24 seconds, and the price fell below $300. More than 15 million Model T’s were built before it was discontinued in 1927, accounting for nearly half of all automobiles sold in the world to that date. The affordable Model T changed the landscape of America, hastening the move from rural to city life, and the moving assembly line spurred a new industrial revolution in factories around the world.