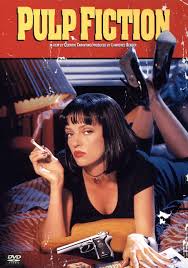 On this day in 1994, the writer-director Quentin Tarantino’s Pulp Fiction, a crime drama featuring multiple storylines and a large ensemble cast including John Travolta, Uma Thurman, Samuel L. Jackson, Bruce Willis and Harvey Keitel, opens in theaters. Made for less than $10 million, Pulp Fiction earned more than $100 million at the box office and was also a huge critical hit, winning the Palme d’Or at the Cannes Film Festival and earning seven Academy Award nominations, including Best Picture. Tarantino and Roger Avary shared the Oscar for Best Screenplay. Some critics have called Pulp Fiction, which spawned a slew of imitators, the most influential movie of its time. It contained such Tarantino trademarks as clever dialogue, graphic violence and numerous pop-culture references. The film is also credited with reviving the movie career of John Travolta, who as the pony-tailed hit man Vincent Vega shares a memorable dance with his boss’ wife (Thurman) and famously discusses with his partner (Jackson) how in France a McDonald’s Quarter Pounder with cheese is called a “Royale with cheese.”

Quentin Tarantino was born on March 27, 1963, in Knoxville, Tennessee. He dropped out of high school, studied acting and worked at a video-rental store in Manhattan Beach, California, where he reportedly spent all day talking about movies. In the late 1980s, he appeared as an Elvis impersonator on an episode of the TV sitcom The Golden Girls. Tarantino made his directorial debut with the 1992 indie film Reservoir Dogs, about the events surrounding a bungled jewel heist. Written by Tarantino, the violent film featured characters with names such as Mr. Pink and Mr. Blonde and co-starred Keitel, Tim Roth, Steve Buscemi, Chris Penn, Michael Madsen and Lawrence Tierney. Initially released in a small number of theaters, Reservoir Dogs garnered more attention and became a cult hit after Pulp Fiction turned Tarantino into a Hollywood darling. His third feature film, 1997’sJackie Brown, starred Pam Grier, Robert Forster, Robert De Niro, Bridget Fonda, Samuel L. Jackson and Michael Keaton. Inspired by the Elmore Leonard novel Rum Punch, Jackie Brown was also an homage to the so-called “blaxploitation” films of the 1970s, a number of which featured Grier.

In addition to directing his own movies, Tarantino also penned the screenplay for 1993’s True Romance, which was helmed by Tony Scott and co-starred Christian Slater, Patricia Arquette. He was also credited with developing the story for director Oliver Stone’s Natural Born Killers (1994), with Woody Harrelson and Juliette Lewis. Tarantino has also continued acting, appearing in several of his own films and co-starring opposite Keitel and George Clooney in 1996’s From Dusk Till Dawn.

Tarantino’s fourth feature project as a director was Kill Bill, which was released as two films, Kill Bill: Vol. 1 in 2003 and Kill Bill: Vol. 2 in 2004. Both movies starred Uma Thurman as a violent, revenge-seeking character called The Bride. Among Tarantino’s more recent projects was 2007’s Death Proof, a movie he wrote and directed about a deranged stunt man, played by Kurt Russell.