A western gunfighter, Indian Scout and prospector, Leslie was best known for having killed Billy Claibourne, one of the infamous Clanton Gang, who feuded with the Earps in Tombstone, Arizona.

Allegedly born in Nashville, Tennessee, though at various points in his life he listed other places, Leslie migrated west somewhere along the line and was working as a scout for the U.S. Army in Texas, Oklahoma and the Dakotas during the 1870’s. By the time he arrived in Tombstone in 1880, the town was teeming with outlaws and other shiftless characters as the Earps were attempting to tame the lawless settlement.

Leslie, though standing just 5 feet 7 inches and weighing 135 pounds, had already earned a reputation as a gunfighter. He earned the moniker of “Buckskin Frank” because of the buckskin fringed jacket that he wore all of the time.

With a matched pair of six-shooters on his hips, and shooting skills that Wyatt Earp would later describe as being comparable to Doc Holliday’s, Leslie fit right in with the rest of Tombstone’s rowdy crowd. Quick to show off his skills, Leslie was known to frequently demonstrate his shooting abilities, often on the ceilings of the many Allen Street saloons.

Leslie was also an ill-tempered and violent man, especially when he drank. Even among the notorious rabble in Tombstone at the time of Leslie’s arrival, he stood out for his quick temper and swiftness with his gun.

Upon his arrival, he worked some at the Cosmopolitan Hotel on Allen Street and later filed a number of mining claims in the area. However, history tells us that he spent more time in the gambling halls than he ever spent working. Almost immediately began to have an affair with a married woman by the name of Mae Killeen. Though the dark-haired beauty was separated from her husband Mike, that didn’t stop the estranged husband’s jealousy, as he told everyone that he would shoot any man that he caught her with. Not long after, that’s exactly what happened when he found Buckskin Frank with “his” Mae on the porch of the Cosmopolitan Hotel. Mike made the mistake of confronting Leslie and wound up dead on June 22, 1880. The killing was officially ruled to have been self-defense. Just one week later, Leslie and the “aggrieved” widow Killeen were married.

After the Gunfight at the O.K. Corral on October 26, 1881, the Earps, who were allegedly friends with Leslie, moved into the Cosmopolitan Hotel feeling they were safer there than in their homes.

Some time later, Leslie badly pistol-whipped a man outside the Oriental Saloon, at which time the Tombstone residents really began to think that Buckskin Frank was a dangerous man, even in the midst of the rest of the notorious rabble of Tombstone. 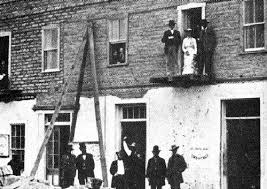 When the famous Tombstone gunslinger John Ringo was found murdered, suspicions focused on Leslie, even though law officers were unable to prove his guilt.

After the Earps had left Tombstone, Leslie became involved in an argument with  a survivor of the O.K. Corral gunfight. who demanded to be called “Billy the Kid” after the death of William Bonney,and had been claiming that he had killed three men who had ridiculed him. In actuality, records indicate that he had only killed one man prior to his confrontation with Leslie. Ridicule had evidently become a part of Billy’s life as his reputation suffered when the details of his fleeing the scene of the O.K. Corral gunfight made their rounds.

On November 14, 1882, Claibourne argued with Leslie, when the gunfighter refused to refer to him as “Billy the Kid.” Later that night, Buckskin Frank was in the Oriental Saloon when a drunken Billy  staggered in and continued his argument with the gunfighter.

Fed up, Leslie escorted him to the door and threw him out of the saloon. However Claiborne was determined and soon returned with a Winchester. Outside the saloon, he began to brag to anyone who would listen that he would kill Leslie on sight. When word of this reached Frank, he took up the challenge, exited the saloon and the inevitable gun battle began.

In the melee, Claiborne’s shots missed, but Leslie hit Billy several times. While Claiborne lay in the dusty street, Leslie walked up to him and the wounded man said, “Don’t shoot me anymore I’m killed.”  His friends took him to the doctor where he died six hours later. Allegedly, his last words were: “Frank Leslie killed John Ringo. I saw him do it.”

When the Apache uprisings began in the mid-1880’s Leslie again worked for the U.S. Army as an Indian scout on at least two separate occasions.

Returning to Tombstone, things were not looking well on the home front, as, after seven years of marriage, he and Mae divorced in 1887. Mae claimed that one of the reasons for the divorce was Leslie’s habit of wanting to shoot her silhouette in the wall as she stood there, proving yet again, his excellent shooting skills.

By this time, Leslie was working as a bartender in the Oriental Saloon, but preferred to spend much of his free time at the Bird Cage theatre  There, he met a young singer and prostitute by the name of Mollie Williams and before long, the two were living together. The “lady” also went by the names of Blonde Mollie and Mollie Bradshaw. Her promoter’s name was Bradshaw, though he was not her husband. However, sometime later he turned up dead and Leslie was automatically suspected. Though he never admitted to killing the man, he never denied it, either.

From the beginning Frank and Mollie’s relationship was based on their mutual love of whiskey which led to frequent and violent quarrels. On July 10, 1889, the violence escalated and Leslie shot Mollie in the head. The murder was witnessed by another man named James Neil, who had the nickname of “Six-Shooter Jim”. Leslie then turned on him and shot him as well. Though Mollie died, Jim survived and would later testify against Leslie.

Buckskin Frank was sentenced to 25 years in the Yuma prison.  The town of Tombstone was glad to be rid of the gunfighter who had confessed to having killed 14 people.

However, after serving just seven years, Leslie won parole with the help of a young divorcee named Belle Stowell. Once he was released, the two traveled toCalifornia, where they were married in Stockton on December 1, 1896. The pair then went on a lavish honeymoon to China before returning to the United States and settling down to a more peaceful life.

Reportedly, Leslie traveled to Alaska during the Klondike Gold Rush before moving on to San Francisco, California in 1904. In 1913, he was running a pool hall in Oakland, California. The 1920 census has him living in a lodging house in Sausalito, California. He is listed as 77 years old, unemployed, and single.

By 1922, he had disappeared from public records. Though the manner of his death remains unconfirmed, some believe that he may have been a broke and homeless man by the same name who died in San Francisco in 1930.