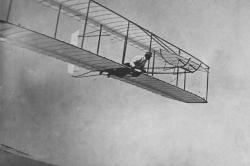 As the 20th century began many aviation pioneers vied to make the first powered flight. There is plausible evidence Richard Pearse in New Zealand, the son of immigrants from Newquay, made a flight of several hundred metres on March 31 1903; there is a faint possibility too that in 1901 Gustave Whitehead in Connecticut made a prolonged sustained flight; and that in the following year Lyman Gilmore with a steam-powered machine made a short hop. Far less believable is the idea that in the summer of 1903 in Errol near Dundee the then 22 year old Preston Watson made a powered flight. But the world generally accepts that the honour of achieving the first sustained, controlled and powered flight in a heavier-than-air machine goes to the Wright Brothers.

Wilbur and Orville Wright were bicycle makers with a shared fascination for flight. Around the turn of the century they worked on gliders and box-kite designs, building up aeronautical knowledge. They developed a rudimentary wind-tunnel; by trial and error came up with workable wing designs; and refined propeller styles and even built their own lightweight internal combustion engine.
In the autumn of 1903 the brothers, from Dayton Ohio, moved their base to Kill Devil Hills near Kitty Hawk (which name did they think most prophetic?) in North Carolina. Engine problems, broken propeller shafts, and other bugbears delayed them. In December first light winds then high winds with rain prevented an attempted flight. On Monday December 14 Wilbur’s first try stalled in the air almost immediately, and the machine was damaged again, only ready again for December 17.
That day, before local witnesses, one of them taking photographs, first Orville flew 120 feet in 12 seconds; Wilbur next made 175 feet; Orville progressed to 200; and then Wilbur got beyond the struggling-for-control phase and flew for a second shy of a minute, taking the Flyer 852 feet: sustained, powered and controlled, the first true heavier-than-air flight.