The virus hits men harder: Sex hormone estrogen ‘reduces the virus’s ability to replicate in women’
Estrogen, the female sex hormone, protects against the flu, a study found
Scientists revealed it has antiviral effects against the influenza A virus
Estrogen was added to nasal samples from men and women with the flu
The study found estrogen reduced virus in female cells – but not male
This could lead to the use of estrogen therapies to protect against the flu

It is a crippling, debilitating disorder that strikes indiscriminately, rendering men bed bound.

Man flu may, to women the world over, be nothing more than an exaggeration, a feeble excuse for a day off work, a way to get out of doing the chores.

And while it has long been said women have higher thresholds for pain and illness than their male counterparts, scientists have now added new evidence to the debate.

Their conclusion – man flu is a real phenomenon, and furthermore it is worse for men than women.

Researchers discovered the shield that protects females from the more aggressive symptoms, is the sex hormone estrogen.

A team from Johns Hopkins University revealed estrogen has antiviral effects against the influenza A virus, commonly known as the flu.

Lead study author Dr Sabra Klein said: ‘We see clinical potential in the finding that therapeutic estrogens that are used for treating infertility and menopause may also protect against the flu.’
Men are hit harder than women by the common flu – because women are protected by the sex hormone estrogen, which has antiviral effects, scientists revealed

And so, the team of scientists sought out to determine if it has the same affect on the common flu.

A virus infects the body and causes illness by entering a cell and making copies of itself inside the host cell.

And, when released from infected cells, the virus spreads throughout the body and between people.

The amount a virus replicates determines its severity.

Thus, less replication of a virus means the infected person may experience a less virulent strain of disease – or is less likely to spread the disease to others.

The researchers examined how estrogen affects the flu’s ability to replicate.

We see clinical potential in the finding that therapeutic estrogens that are used for treating infertility and menopause may also protect against the flu
Dr Sabra Klein, of Johns Hopkins University
The team gathered nasal cells – which is the cell type the flu virus primarily infects – from both male and female donors. 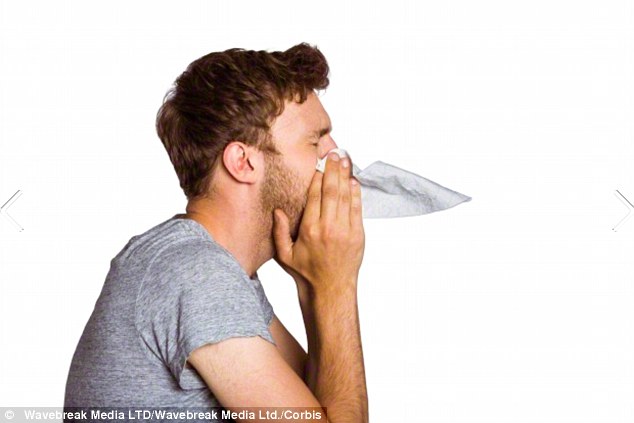 The cell cultures were exposed to the virus, estrogen, the environmental estrogen bisphenol A and selective estrogen receptor modules (SERM) – compounds that act like estrogen and are used in hormone therapy.

The scientists determined that estrogen, SERM compound raloxifene and bisphenol A reduced flu virus replication in nasal cells from women.

However, they were not found to reduce the virus in men.

Furthermore, the team found that the estrogens initiated their antiviral effects through estrogen receptor beta.

Receptors are protein structures that bind with molecules to promote cell response.

Dr Klein said: ‘What makes our study unique is two-fold.

‘First, we conducted our study using primary cells directly isolated from patients, allowing us to directly identify the sex-specific effect of estrogens.

The study’s findings support earlier evidence showing the protective effects of estrogen against the flu in animals.

Dr Klein said: ‘Because estrogen levels cycle in premenopausal women, it may be difficult to see this protective effect in the general population.

The study was published in the American Journal of Physiology – Lung Cellular and Molecular Physiology.