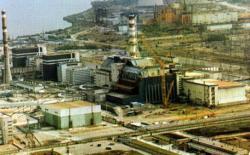 When on April 26 1986 a terrible accident occurred at the Chernobyl nuclear plant in the Ukraine, then part of the Soviet Union, individual heroism was matched by official misjudgement.
Chernobyl’s nuclear plant was already decrepit, and as it turned out the design suffered from fatal flaws; added to that, staff operating the power station failed to follow the correct procedures – indeed the original spark for the disaster was an unauthorised systems test. A chain of events led rapidly to a fire in the reactor. Had that fire not been extinguished even greater contamination and damage would have resulted, possibly catastrophic. The firemen who were first on the scene prevented such an escalation, almost certainly knowing that they were being exposed to potentially deadly radiation. Several of their number were among the immediate casualties.
The Soviet regime at first tried to cover up what had happened. It was only on April 29, after radioactive material had been spread by the prevailing winds over much of Western Europe, that the truth was at least partly admitted, although the town nearest the plant was evacuated on April 27 (supposedly for three days – it and an area of radius 30km around the plant remain empty still).
Soviet thinking was deeply affected by the disaster. Though it was not a major cause of the fall of the communist regimes just a few years later, it was a contributory factor, highlighting a need for that Pandora’s Box, openness.
As regards the UK, many upland areas were affected by the fallout. As of 2009 certain Welsh, Cumbrian and Scottish farms still had to have the meat from their lambs checked for contamination before sale.