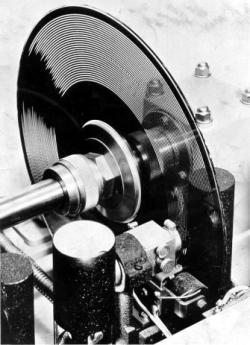 The first voice of the speaking clock was that of telephonist Ethel Jane Cane, who worked at the Victoria Telephone exchange in London . She won a competition involving 15,000 telephonists, which incidentally helped no end to promote the upcoming service, her prize being eternal fame and ten guineas. Or fame until 1963 when another vice was used.
These days the equipment is of course digital, occupying space the volume of a suitcase; in 1936 the glass discs, relays, valves and other gizmos filled a room.
In time-keeping terms the new system, reached by dialling TIM (i.e. 846) in major cities like Manchester and London, and 952 elsewhere, was another technological leap-forward as significant as that provided by the railway age. The railways brought in the need for time to be as closely co-ordinated as possible to allow for smooth timetabling; the speaking clock made that timekeeping work… precisely. At the third stroke.