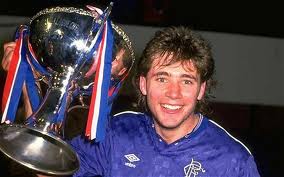 The striker, nicknamed “Super Ally,” started his professional career in 1979 with St. Johnstone. He had a breakout season in 1980-81, scoring 22 goals in 38 league appearances, which led to a move to Sunderland. But after two unsuccessful seasons there, he returned to Scotland, signing with Rangers in 1983 for a fee of £185,000.

Rangers hadn’t won the league since 1978, but with McCoist contributing 34 goals, they won it in 1987 and followed that one with nine straight between 1989 and 1997. In both 1992 and 1993, McCoist matched his tally of 34 league goals, winning the European Golden Boot for both seasons. Along the way, McCoist also won nine Scottish League Cups and the 1992 Scottish Cup. While at Rangers, he made 61 appearances for Scotland, where his 19 goals rank him fifth on their list of all-time scorers.

His played the last three seasons of his career for Kilmarnock (1998-2001), then moved into management. In 2004, he served under Scotland manager Walter Smith, then moved with Smith back to Rangers in January 2007. Upon Smith’s retirement in 2011, McCoist took the reins for the 2011-12 season, which ended with the club in administration and re-forming as a fourth-tier club. McCoist guided them back to the second tier before resigning in 2014