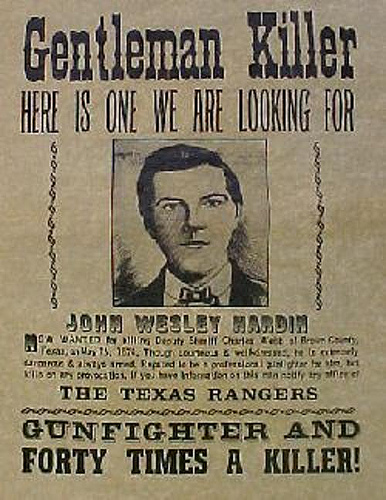 Infamous gunslinger John Wesley Hardin is pardoned after spending 15 years in a Texas prison for murder. Hardin, who was reputed to have shot and killed a man just for snoring, was 41 years old at the time of his release.

Hardin probably killed in excess of 40 people during a six-year stretch beginning in 1868. When he was only 15, Hardin killed an ex-slave in a fight, becoming a wanted fugitive. Two years later, he was arrested for murder in Waco, Texas. Although it was actually one of the few he had not committed, Hardin did not want to run the risk of being convicted and escaped to the town of Abilene.

At that time, Abilene was run by Wild Bill Hickok, who was friendly with Hardin. However, one night Hardin was disturbed by the snoring in an adjacent hotel room and fired two shots through the wall, killing the man. Fearing that not even Wild Bill would stand for such a senseless crime, Hardin moved on again.

On May 26, 1874, Hardin was celebrating his 21st birthday when he got into an altercation with a man who fired the first shot. Hardin fired back and killed the man. A few years later, Hardin was tracked down in Florida and brought to trial. Because it was one of the more defensible shootings on Hardin’s record, he was spared the gallows and given a life sentence. After his pardon, he moved to El Paso and became an attorney. But his past caught up with him, and the following year he was shot in the back as revenge for one of his many murders