After months of doling out the specs, Fisker finally unveiled their EMotion electric vehicle

The Fisker EMotion, which made its debut at the Consumer Electronics Show in Las Vegas, is part of a comeback effort for Henrik Fisker, a former BMW and Aston Martin designer whose first venture was halted in 2013 after selling only a few thousand vehicles.

This time, the company Fisker Inc. is pulling out all the stops for the vehicle, designed with butterfly doors and a sleek sportscar look, semi-autonomous driving, and a range of some 400 miles (650 kilometers) on a single charge.

The car, which is still two years from deliveries, “is a new take on the future of a luxury sedan,” Fisker told AFP on the CES show floor.

Fisker said the features such as the extended driving range “will make even people sitting on the fence (about electric cars) look at it.”

The new effort nonetheless faces an uphill battle in an industry where Tesla is showing rapid growth and other rivals from major automakers to startups—including one other making a debut at the tech show—are producing new electric cars.

Fisker is also working on its own battery technology aimed at improving range and speeding the charging time.

He hopes to have a charging system that can enable an extra 125 miles in nine minutes.

The company is also working on a solid state battery that Fisker maintained could achieve a full charge in one minute. 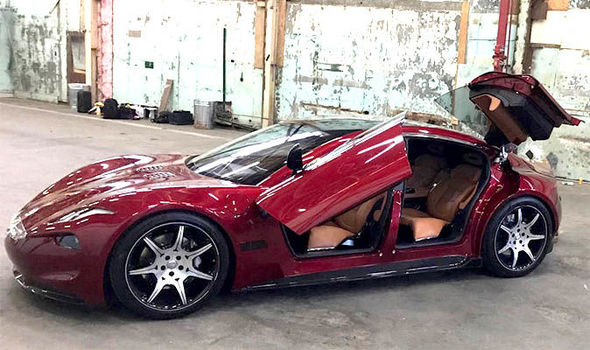 Like Tesla, Fisker is also working on a more affordable vehicle that would be priced around $40,000 after the Emotion. And it has designed a self-driving shuttle bus called the Orbit that could also launch in the next few years.

Partnering with Fisker is California-based technology firm Quanergy, which is developing the LIDAR used for autonomous driving.

The Emotion uses five LIDAR sensors integrated into the body and “it’s the only LIDAR with no moving parts,” said Quanergy CEO Louay Eldada.

The launch by Fisker’s new company comes after a high-profile bankruptcy by Fisker Automotive.

Before launching his own venture and the Fisker Karma, Fisker designed vehicles including the BMW Z8 and Aston Martin DB89.

Other firms at CES appear to be making a play for Tesla clients with electric vehicles with autonomous capabilities.

China-based startup Byton announced this week it planned to launch a $45,000 electric car featuring a “digital” lounge with a panoramic display acting as a hub for navigation, entertainment and even monitoring the health of its occupants.

Last year, Chinese-backed Faraday Future unveiled its premium electric vehicle but since then have offered few clues on its availability.

Still, Tesla remains a target for both established automakers and startups.

“In my opinion Tesla is vulnerable,” said Jack Gold, an analyst who follows the tech sector and who was attending CES.

In addition to the companies presenting at CES, Gold said, there are a number of other Chinese firms which could use the shift in consumer trends to break into new markets.

“I think it’s a big opening for the Chinese. And the Chinese government is subsidizing them.”

The electronics show is often used to debut new automotive technology even though it takes place just days ahead of the big Detroit auto show.

In conjunction with the vehicle’s launch itself, Fisker also debuted the company’s solid-state battery. He said that battery would give an electric car over 500 miles of range in a one minute charge. That would significantly outperform current electric cars on the market — including Tesla. (And, for another point of comparison, the Hyundai Nexo promises 370 miles and just a 5-minute charging time.)

There’s an important element to note regarding the charging times, and that issue all boils down to the actual promise involved. The Fisker Inc. press release said “The Fisker EMotion has been proportioned to accommodate an advanced high-energy density, patent-pending battery pack and cooling system. It can be charged through the vehicle’s proprietary UltraCharger™ technology, charging over 100 miles in nine minutes.”

That means that it takes nine minutes for the vehicle to reach 25 percent of its charge, a claim easily mistaken when compared to other EVs on the market.

We’ve also made the seemingly impossible, possible with our scientists spearheading the breakthrough in Flexible Solid-State battery technology – which is the next generation in charging everything from your personal cell phone to enabling mass adoption of electric vehicles due to unprecedented ranges and lighting fast charge times,” Fisker said. “We’re incredibly excited to showcase working solid-state batteries and the vehicle, in-person, on such a massive global stage. Fisker Inc. is about breaking barriers, leading in automotive technologies and ultimately creating the most desirable, functional futuristic electric vehicles.”

Fisker, like other electric vehicles being showcased at this year’s CES, will have to contend with the fact that charging stations are limited throughout the United States and other countries. But, like other EV automakers, Fisker remains hopeful that normalizing electric vehicles leads to infrastructure that supports their growth as a market.