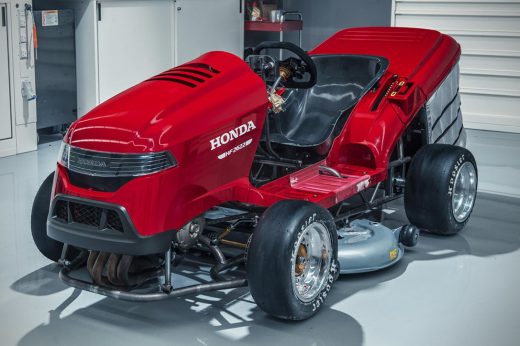 If there’s anyone who knows a thing or two about going fast, it’s the folks at Top Gear. And that doesn’t just mean in cars – as was evidenced when they set a Guinness World Record for building the world’s fastest lawnmower with Honda back in 2014. Unfortunately, they were dethroned shortly thereafter. Now, however, they’re looking to ascend again with the Honda Mean Mower Mk. 2.

To be driven in the world-record attempt by stunt driver, Jess Hawkins, this second iteration grass-cutter features some major improvements over the original. For instance, the output has been nearly doubled – that means 190+ bhp from the new 999cc SP1 Fireblade engine onboard. The team building it is also shooting toward a dry weight of only about 440 lbs, which means – when paired with the engine output – this lawnmower may be able to do 0-60 in under 3 seconds. Whether or not they shatter the record remains to be seen, but by all accounts this is promising to be an impressive machine.