Our Sun is a normal main-sequence G2 star, one of more than 100 billion stars in our galaxy but although The sun may appear to be the largest star in the sky, that’s just because it’s the closest. On a stellar scale, it’s really quite average — about half of the known stars are larger; half are smaller. The largest known star in the universe is UY Scuti, a hypergiant with a radius around 1,700 times larger than the sun. And it’s not alone in dwarfing Earth’s dominant star.

The largest of all

In 1860, German astronomers at the Bonn Observatory first cataloged UY Scuti, naming it BD -12 5055. During a second detection, the astronomers realized it grows brighter and dimmer over a 740-day period, leading astronomers to classify it as a variable star. The star lies near the center of the Milky Way, roughly 9,500 light-years away.

Located in the constellation Scutum, UY Scuti is a hypergiant, the classification that comes after supergiant, which itself comes after giant. Hypergiants are rare stars that shine very brightly. They lose much of their mass through fast-moving stellar winds.

Of course, all stellar sizes are estimates, based on measurements taken from far away. 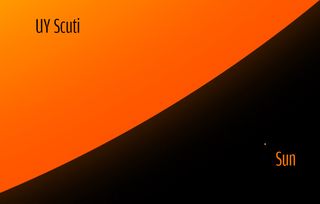 “The complication with stars is that they have diffuse edges,” wrote astronomer Jillian Scudder of the University of Sussex. “Most stars don’t have a rigid surface where the gas ends and vacuum begins, which would have served as a harsh dividing line and easy marker of the end of the star.”

Instead, astronomers rely on a star’s photosphere, where the star becomes transparent to light and the particles of light, or photons, can escape the star.

“As far as an astrophysicist is concerned, this is the surface of the star, as this is the point at which photons can leave the star,” Scudder said.

If UY Scuti replaced the sun in the center of the solar system, its photosphere would extend just beyond the orbit of Jupiter. The nebula of gas stripped from the star extends even farther out, beyond the orbit of Pluto to 400 times time the Earth-sun distance.

But UY Scuti doesn’t remain stagnant. Scudder pointed out that the star varies in brightness as it varies in radius, with a margin of error of about 192 solar radii. These errors could allow other stars to beat out UY Scuti in the race for size. In fact, there are as many as 30 stars whose radii fit within UY Scuti’s smallest estimated size, so it shouldn’t sit too securely on its throne.

Nor does UY Scuti’s large radius make it the most massive star. That honor goes to R136a1, which weighs in at about 300 times the mass of the sun but only about 30 solar radii. UY Scuti, in comparison, is only about 30 times more massive than the sun.

So which star would take UY Scuti’s place if it weren’t exactly 1,708 solar radii? Here are a few of the stars that might dominate: