Captain Sir John Franklin was both a highly regarded and popular naval officer to his contemporaries.

A veteran of the Battle of Trafalgar, a young officer in the first ship to circumnavigate Australia, the discoverer and surveyor of the south-western end of the hoped-for North-West Passage, and Lieutenant-Governor of Van Diemen’s Land where he was widely praised for his humane treatment of both the settlers and convicts.

He was known as ‘The man who ate his boots’ after surviving his crossings of northern Canada, and his ship HMS Rainbow was known as ‘Franklin’s Paradise’ when he refused to inflict flogging as a punishment.

Until the tragedy of Captain Scott, Franklin was always the exemplar of polar exploration despite his expedition’s tragic end. 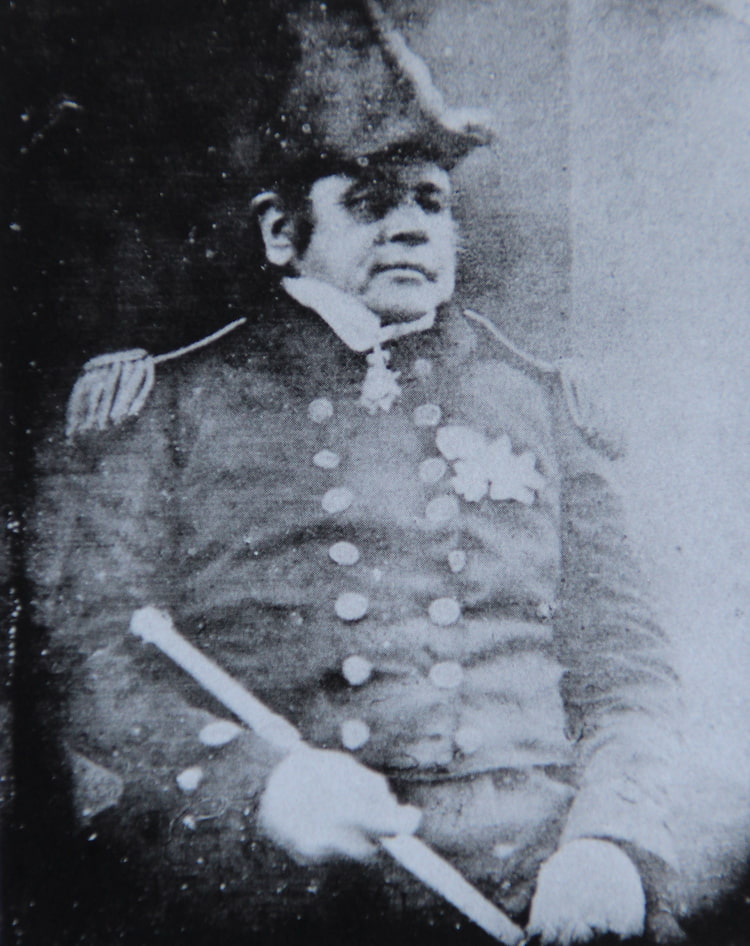 Daguerreotype photograph of Franklin taken in 1845, prior to the expedition’s departure. He is wearing the 1843–1846 pattern Royal Navy undress tailcoat with cocked hat.

When the Admiralty decided to mount a sea-borne expedition to discover the North-West Passage in 1845, the 59-year-old Franklin requested that his name be considered to lead the enterprise.

At first, the Admiralty were reluctant to comply due to his age, but his fellow officers with polar experience, including such illustrious names as John and James Ross, William Parry, Frederick Beechey, and George Back, supported Franklin and he was eventually selected.

The expedition was to take part with HMS Erebus and HMS Terror, two especially adapted and strongly built former bomb vessels in which much polar experience had already been obtained.

Fitted with former railway locomotives as additional sources of power, they also had the ship’s screws and rudders designed so that they could be lifted clear of the water if they were threatened by ice. Several of the officers had polar experience, and the ship’s companies were all volunteers.

The expedition sailed on 19 May 1845, calling at Stromness on Orkney, and at islands in West Greenland’s Disko Bay. After exchanging signals with two whaling vessels in Baffin Bay, Franklin, his men, and his ships disappeared after heading towards Lancaster Sound.

Urged on by Jane, Lady Franklin, in 1848 the Admiralty and the American Navy sent out search expeditions. The search ships entered Lancaster Sound and probed westwards along the Parry Channel and the graves of three of Franklin’s men were found on Beechey Island off the northern shore of the Channel. 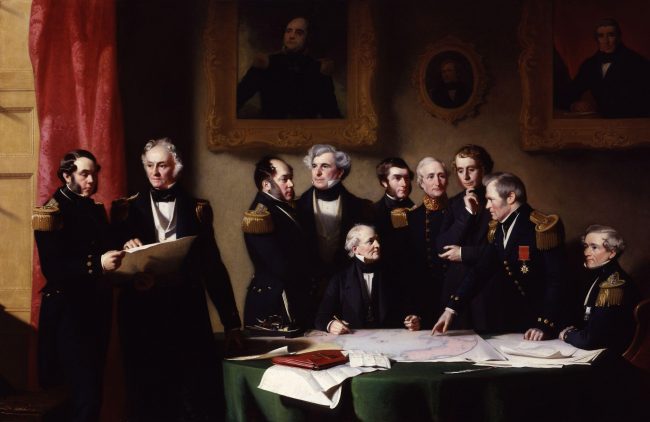 Eventually, in 1859, a search expedition under the command of Captain Francis McClintock found the evidence for which they had all been searching.

A ship’s boat along with skeletons and other remains were discovered on the south-western coast of King William Island, an island at the southern end of Peel Sound.

Of even greater importance, McClintock’s deputy, Lieutenant William Hobson, found a message in a cairn on the north-western shore of the island. 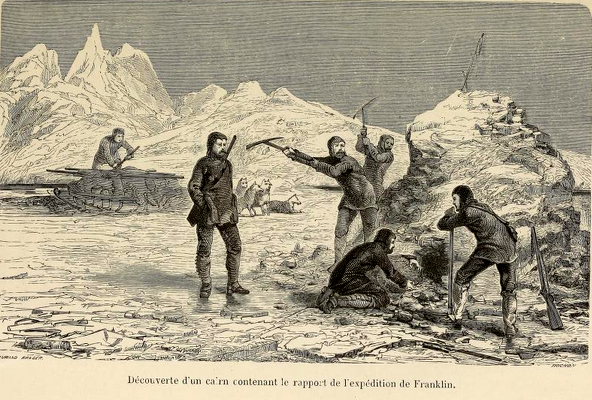 William Hobson and his men finding the cairn with the “Victory Point” note, Back Bay, King William Island, May 1859.

The note explained that Franklin’s ships had been deserted after two winters locked in the ice ‘5 leagues NNW’ of the landing site. Franklin had died in June, 1847, and the survivors landed on King William Island in the hope of making their way overland to the south. None were to survive the journey.

In the meantime, a Hudson’s Bay Company employee, John Rae, return to England with artefacts from Franklin’s expedition he had obtained from the local Inuit.

He also brought with him tales of cannibalism he claimed to have heard from the same Inuit, claims that were utterly rejected by all those who had known Franklin and his men. None of the Inuit had visited the site of the Franklin tragedy and none would escort Rae to the site.

Despite being just a few days march away – and ignoring rumours that his own men had heard that there were survivors of the expedition still alive – Rae raced across the Atlantic claiming that he did not know of any reward for finding evidence of the Franklin expedition and, furthermore, claiming that he had discovered the North-West Passage.

A revival of interest

The story of the Franklin expedition gradually faded into history only to be brought back into the glare of harsh publicity when a 1984-86 Canadian expedition led by academics disinterred the bodies on Beechey Island.

To a blaze of media attention, and the publication of a best-selling book, it was claimed that an examination of the dead (and by extension, all the seamen on the expedition) had revealed that they had died of lead poisoning.

Observations that such an idea was manifestly nonsense were totally ignored and dismissed out of hand. It was this reaction that led me to mount four expeditions to King William Island in order to make my own search, and to come to my own conclusions.

During 1992-93 other academic-led Canadian expeditions visited Erebus Bay, the site where McClintock had discovered the ship’s boat. A large number of human bones were found in a cairn where they had been deposited by an 1878 American expedition.

Much to the delight of the expedition leaders, the bones not only ‘confirmed’ the lead-poisoning claim, but ‘cut marks’ on some of the bones equally confirmed the Inuit tales spread by Rae.

Once again, any opposition to the expedition’s conclusions were swept aside or ignored. In a bid to set the cannibalism concept in concrete, in 2015, academics decided that some of the bones had been ‘pot polished’ as the devourers of their messmates boiled the bones in order to obtain the marrow contained therein.

In 2006, the Canadian Prime Minister, Stephen Harper, decided that scientists employed by the government should not be able to communicate directly with the media or with to the public.

In addition, all government documentation and other data should be either destroyed or held securely against publication. Scientific research was cut dramatically and scientists were dismissed in their hundreds. Research facilities and government libraries were closed down.

Then, also in 2006, a Bahamas-flagged ocean liner sailed through the North-West Passage and, the following year, the Russians made a claim to the North Pole and other Arctic areas based on

‘a broad range of scientific data collected over many years of Arctic exploration’,

although actually based on little more than a soil sample taken from the seafloor beneath the Pole and the dropping of a titanium Russian flag in the same place.

The quest for HMS Erebus and HMS Terror

By 2013, the Prime Minister began to take a political interest in the sovereignty of the Arctic. That year, a government-sponsored underwater expedition was mounted to examine the wreck of HMS Investigator, a Franklin search ship that had been abandoned by Commander Robert McClure when he led his surviving men on foot and sledge through the Passage.

The ship was easily found (it had been spotted from the air many years earlier). This led to a number of expeditions, both government sponsored and privately funded, in search of Franklin’s lost ships.

Again, no government employee was allowed to contact the media – all such contact had to be made through authorised government sources, closely supervised by a small coterie of senior Government officials.

The only exception to this ruling was the Chairman and former President of the Canadian Royal Geographical Society, the same individual who wrote the book about the early 1980s expeditions to Beechey Island (although he had never been on the expedition), and a close friend of the Prime Minister.

When the find was publicly announced (by the Prime Minister) there was worldwide recognition of a great achievement. Medals were invented and awarded – even to those who never came anywhere near the discoveries. Harper appearing at a gala at the Royal Ontario Museum in Toronto to celebrate the discovery of HMS Erebus, one of two ships wrecked during John Franklin’s lost expedition (Credit: Alex Guibord / CC).

The Canadian Arctic was secure in the hands of its proper owners – the Canadian people. Sovereignty was established, and an election was in the offing.

Then a rather strange thing happened. Academics and, at least one ‘celebrity’ decided that the success had to be underlined – not to further emphasise the Canadian achievements (which no-one was challenging) but by launching a sustained attack upon Franklin, the Royal Navy, and the English.

An internationally renowned Canadian novelist – not known for her polar expertise – described Franklin as ‘a dope’.

An American professor described the Franklin expedition as

‘a failed British expedition whose architects sought to demonstrate the superiority of British science over Inuit knowledge.’

A professor who took part in the Erebus Bay expedition declared that ‘the question of lead poisoning is settled.’ Another author trumpeted that Franklin’s widow mounted ‘a smear campaign’ against Rae ‘supported by racist writing from the likes of Charles Dickens’.

There were many more attacks on Franklin and his men, all of which ignored the multitude of questions that need answers.

For example, from 1984 to 2018, despite the evidence against lead poisoning, the matter was spread far and wide and was considered unanswerable – yet, in 2018 a genuine study using the simple method of comparison concluded that their finding

‘…did not support the hypothesis that the Franklin sailors were exposed to an unusually high level of Pb for the time period’.

On the question of cannibalism, the academics were adamant that the ‘cut marks’ on the bones at Erebus Bay were unchallengeable proof that the British seamen ate each other. Their reason for this nonsense was that the Inuit were ‘a stone age people’ who did not have access to metal.

In fact, the local tribe had already achieved a reputation for aggressively driving away other tribes using weapons made from a mountain of metal that Captain John Ross had left on their doorstep. Evidence that pointed to female and young male bones amongst those found at Erebus Bay was, at first, wholly misinterpreted, and then disregarded.

As for the ‘pot polishing’ claim, it was quietly forgotten that bones left on the rough, gritty surface of the Arctic are subjected over many years to the strong winds that not only throw more grit at them, but are also rolled or are scraped along the ground.

During his investigations into the idea that the Inuit attacked the seamen, I was approached by a well educated Inuit woman who bluntly told him that ‘My people killed your people.’ Nevertheless, a statue has been erected to John Rae on Orkney. 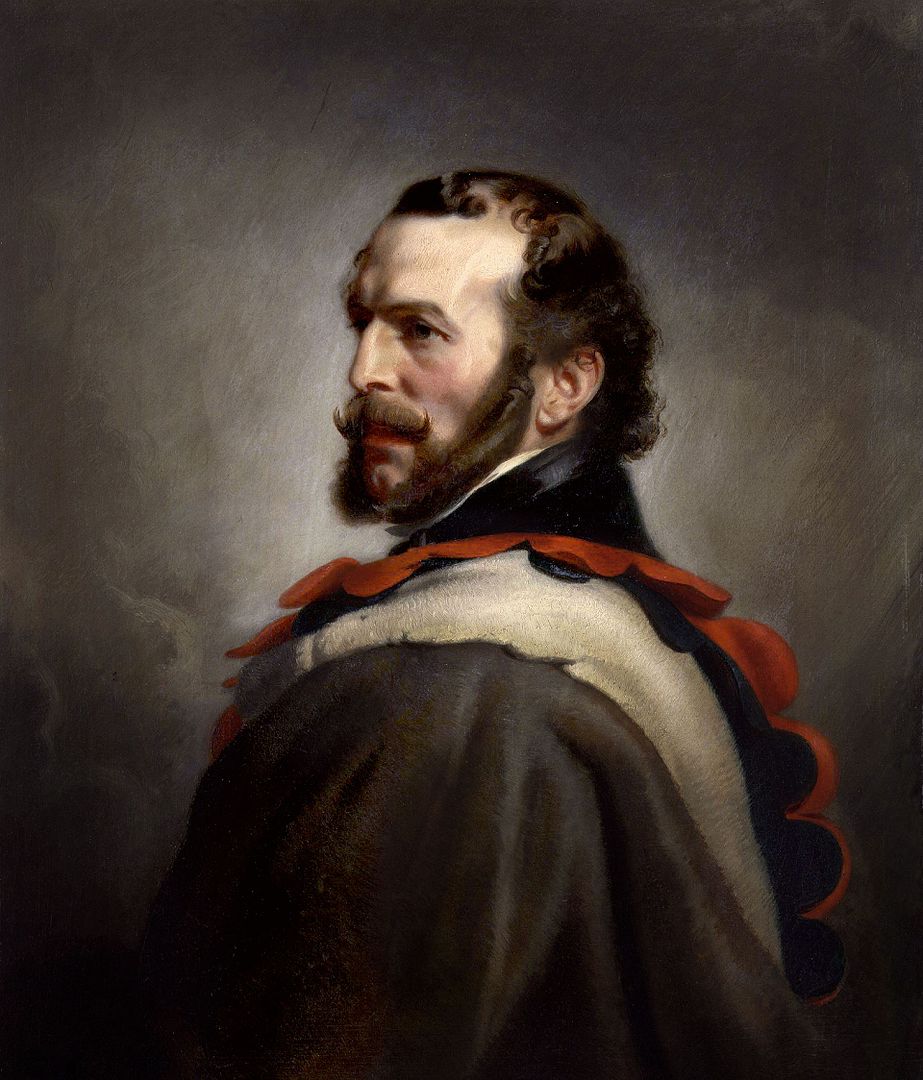 The locating of the ships was a magnificent achievement, but there were some questions, nevertheless, to be answered. How, for example, could a heavy ship’s fitting detach itself from a sunken ship, roll along the sea bottom, up a beach slope, and throw itself into the shingle to be found by accident?

How could a diver by the stern of a sunken ship indicate in detail the unique arrangements of the ship’s propeller and rudder when photographs of the vessel clearly show that the stern had been completely destroyed?

Why is the size and design of the ship’s bell completely against the ‘custom of the Service?’ And why has the ship’s wheel shrunk from the large, double, version seen in the photograph before the expedition sailed, to the small version found that would have been more suitable for a sailing yacht?

How did the masts of one of the ships remain clear of the water long enough for a 21st-century Inuit to spot them, yet not be noticed by professional seamen like McClintock and others who walked along the same shore – then to have disappeared when the man returned just a few days later?

All these questions and many more, based on my thirty-six years’ service in the Royal Navy and four expeditions to walk across the ice and land of the scene of the tragedy, are explored in No Earthly Pole.