The Arc Vector electric motorcycle made its first public appearance at the Goodwood Festival of Speed. 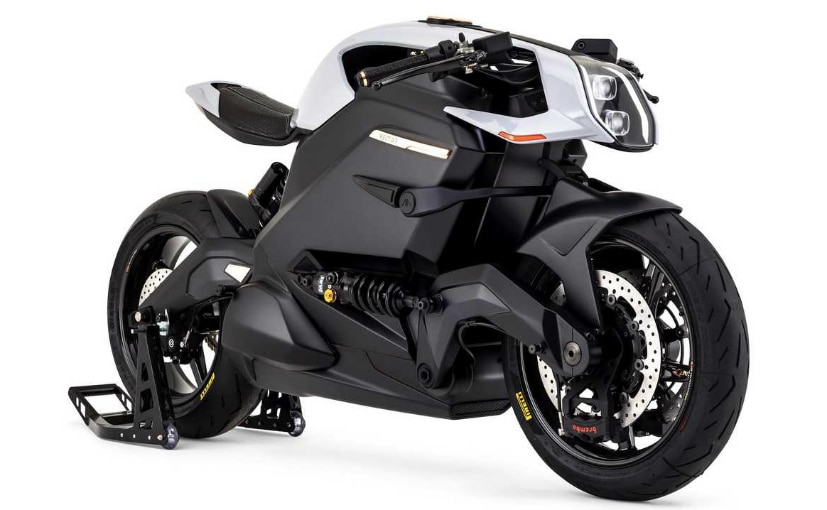 The Arc Vector electric motorcycle, capable of hitting a top speed of over 200 kmph, will make its first public appearance at the Goodwood Festival of Speed from July 4-7 alongside other superbikes and performance motorcycles. Arc founder and CEO Mark Truman will be the person who will ride the Vector on the famed hill climb. The final production model Vector will be powered by a 399V electric motor that churns out close to 140 bhp and 85 Nm of peak torque. It will be a limited edition model and only 355 units will be made for sale. 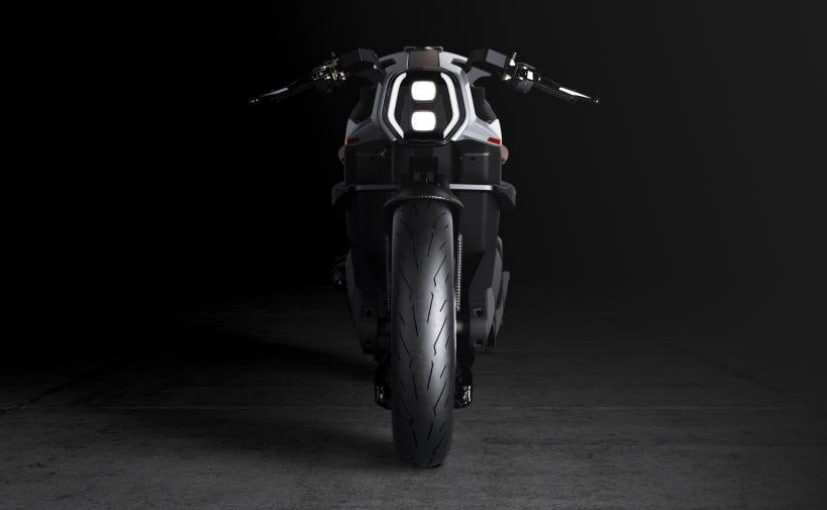 The Arc Vector has a top speed of over 200 kmph

“Goodwood is the ideal place for us to show the Vector to the people for the first time. We’ve been testing behind the scenes and now the bike is emerging from the shadows. It is the most amazing thing both to ride and behold. Up to 1,50,000 are expected at the Festival of Speed, and I hope they all get a chance to see what we’ve been working on; a unique, all-electric neo cafe racer with all sorts of kit never before seen.” Said Mark Truman. 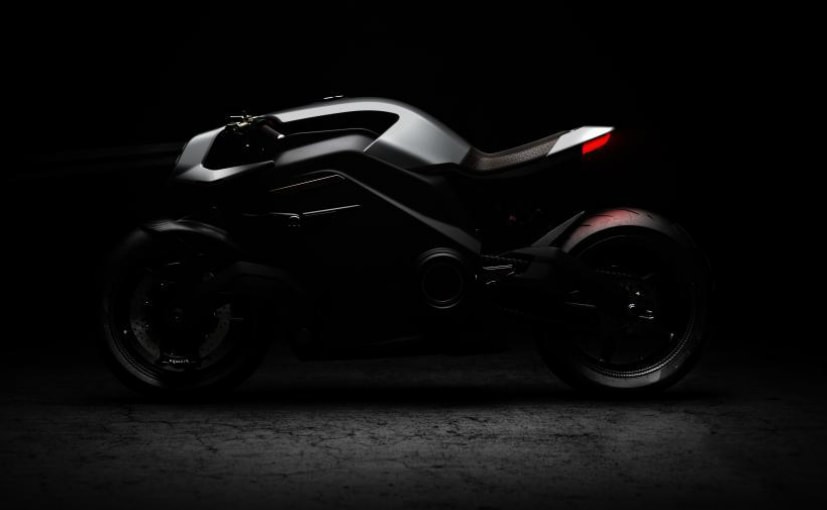 Designed and built in England the Arc Vector is described as one of the world’s most advanced electric motorcycle. It’s built around a carbon fibre monocoque, and 0 to 100 kmph acceleration is estimated at 2.7 seconds. Range is claimed at over 270 km on a single charge within the city, and 190 km range for highway riding. The Vector comes with a carbon fibre swingarm, Ohlins suspension and Brembo brakes.

The Vector also comes with a Zenith helmet with built-in head-up display, and the helmet works in conjunction with an Origin riding jacket that features haptic feedback. The haptic alerts can warn the rider of a car approaching from either side, while the helmet displays all necessary infotainment information, and even provides a view from behind the rider. The Arc Vector will be available commercially from the summer of 2020, but the limited edition model won’t be affordable. Each bike is expected to be priced at around ₹ 80 lakh, under current exchange rates. 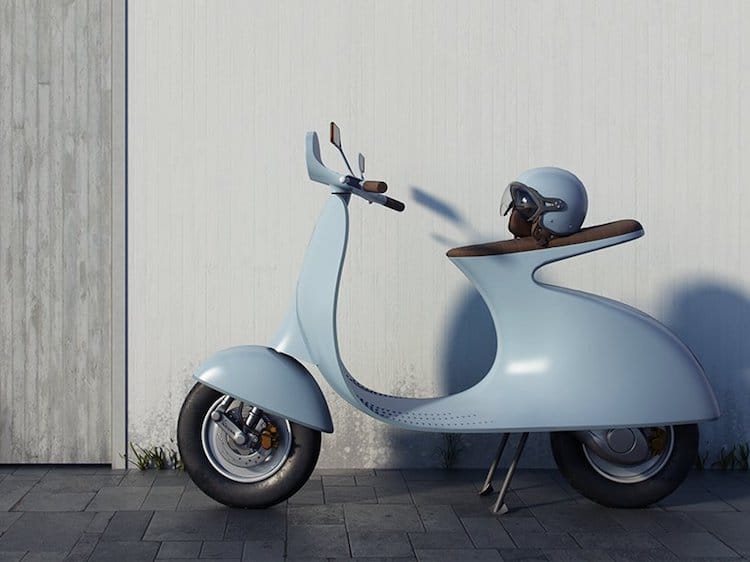 Over the years, the Vespa has become increasingly bulky, but Iacchetti’s proposed electric motor allows him to remove lateral side panels for a slimmed down version. This brings his concept back to the days when the Vespa graced the screen during the Golden Age of Italian Neorealist cinema. Yet, while cultivating this nostalgia, Iacchetti doesn’t lose sight of new technology.

A built-in smartphone holder recharges your phone while keeping it protected from the rain. And the speedometer, fuel gauge, and lights are accessed through a wireless app. At the same time, the designer maintains classic elements like the front circular headlight and cleverly integrates turn signals into the rear-view mirrors. Overall, Iacchetti has put an interesting twist on the Vespa, a classically Italian scooter born from the necessity for affordable transportation in post-World War II Italy. 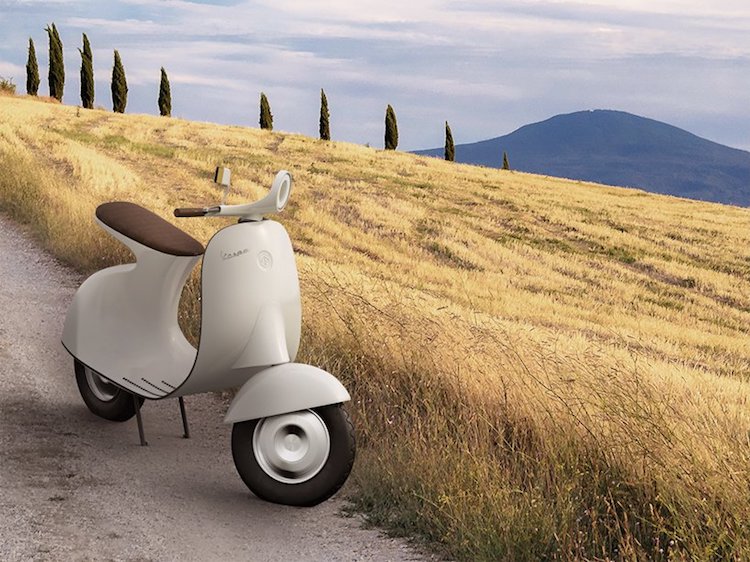 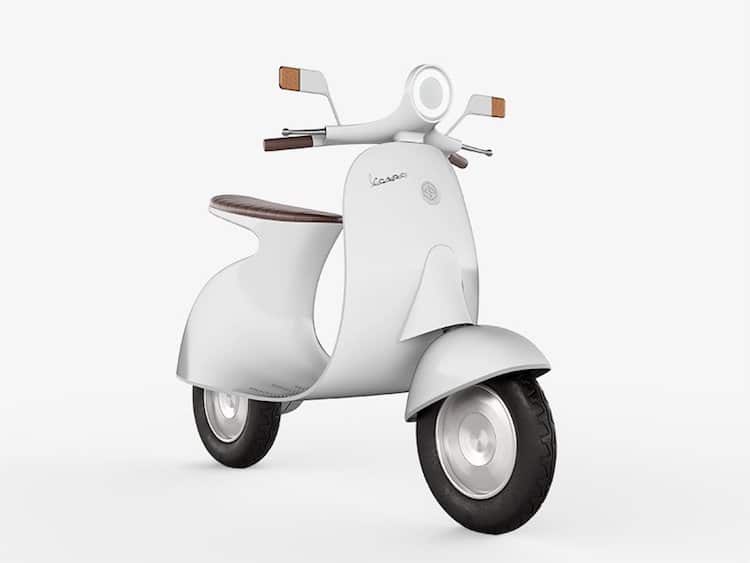 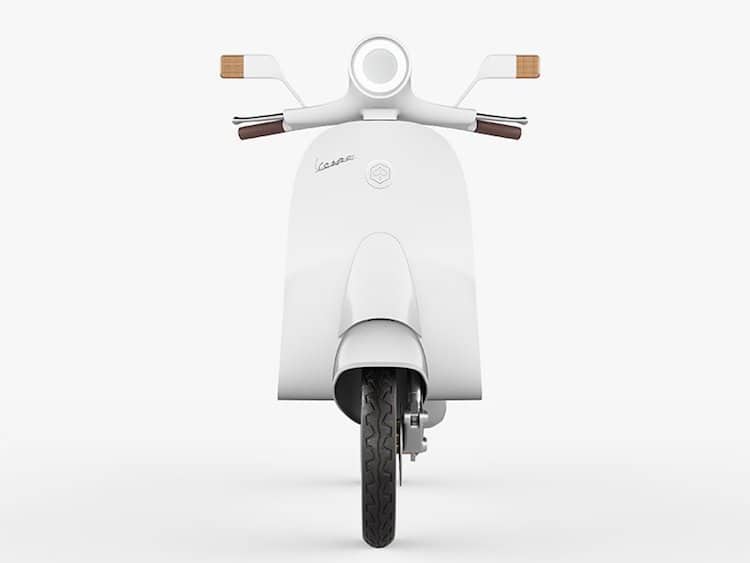 The cantilevered seat is a nod back to early Vespa designs, while the model has integrated smartphone technology. 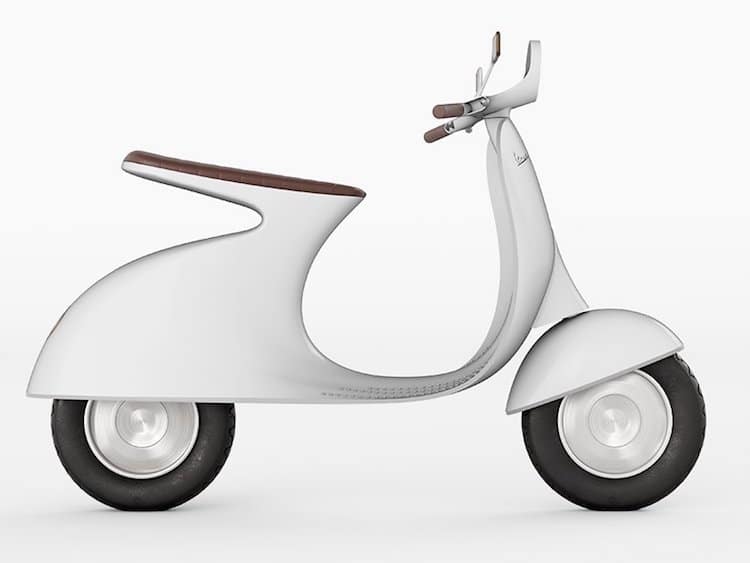 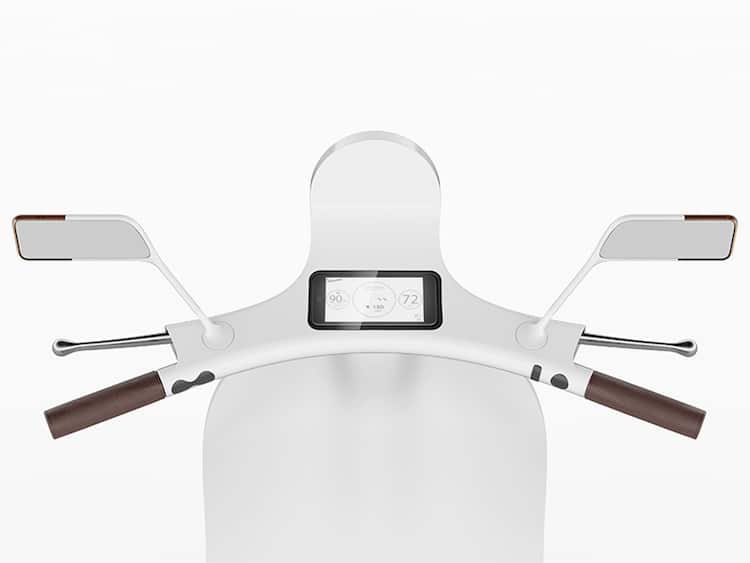 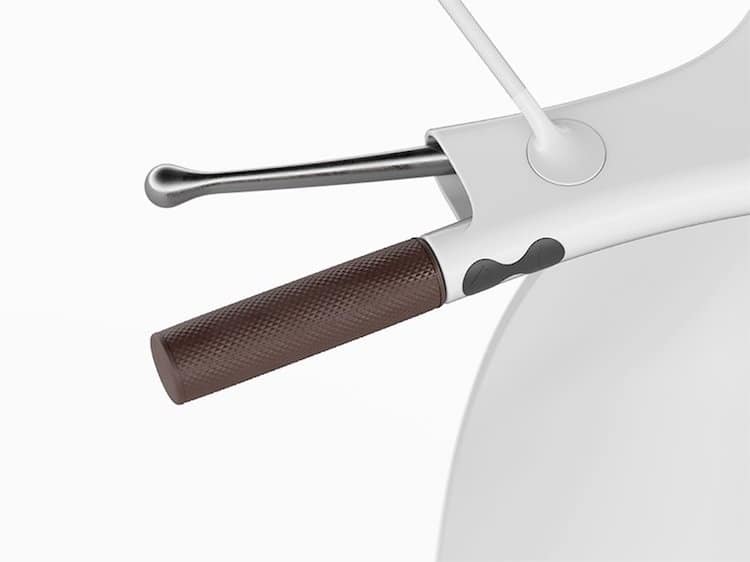 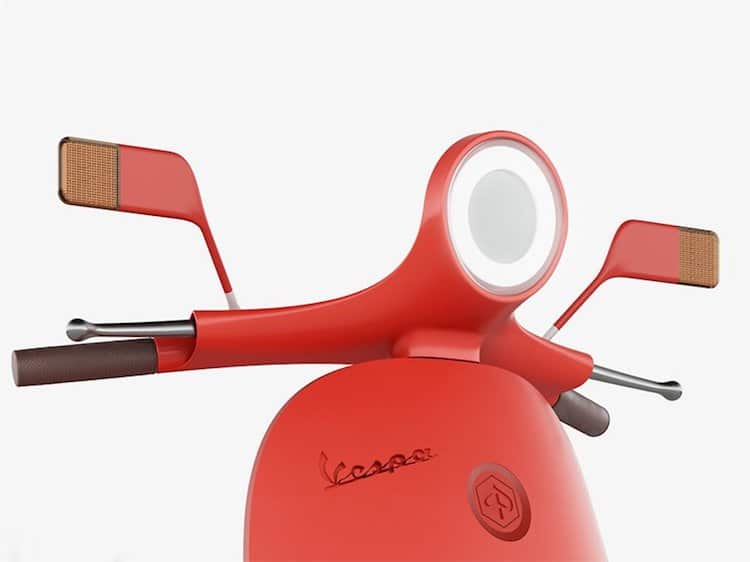 The Vespa 98, which debuted in 1946, was a source of inspiration for Iacchetti’s revamped scooter. 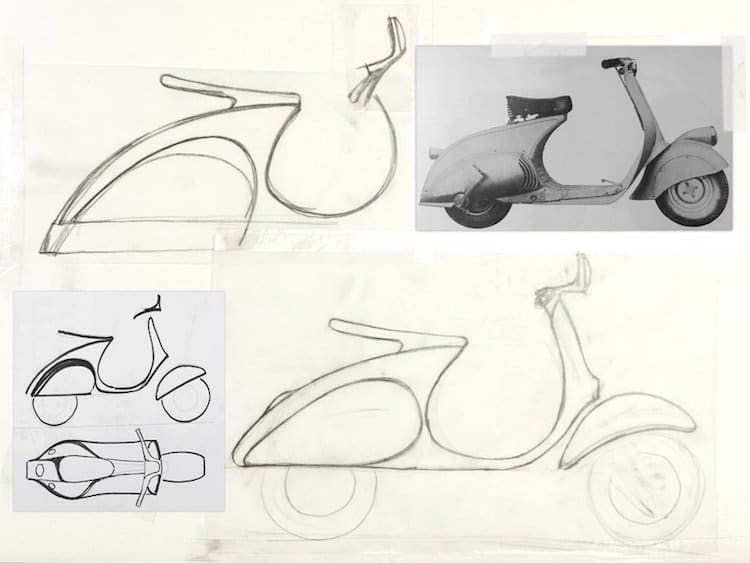 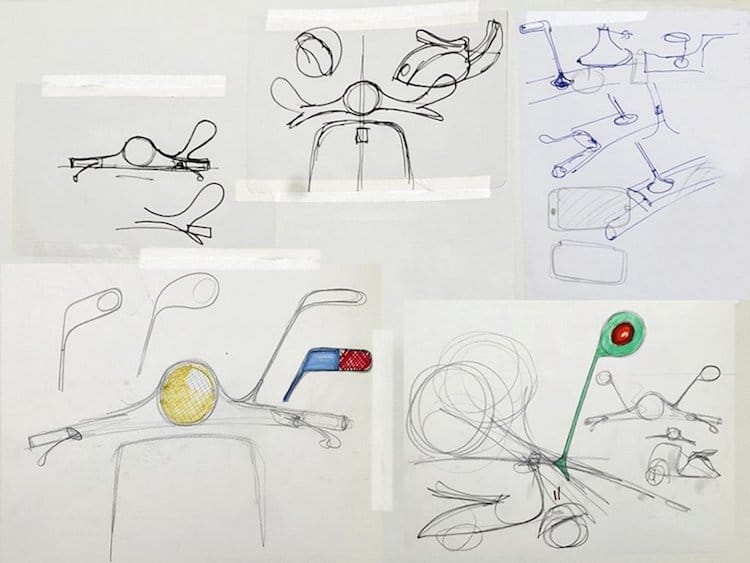 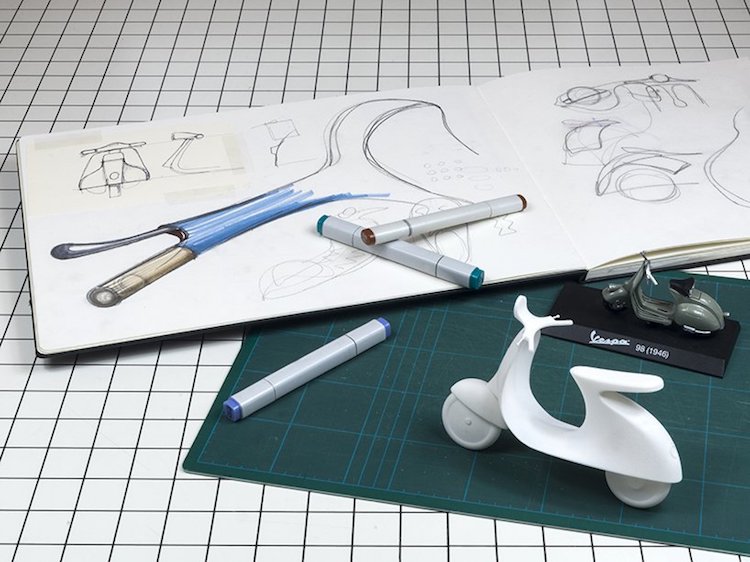