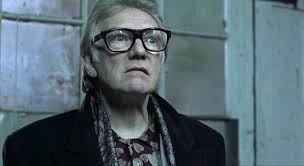 Alan Ford (born 23 February 1938)[1] is an English actor. He is best known for his roles in the Guy Ritchiecrime capers Lock, Stock and Two Smoking Barrels and Snatch,

Brick Top was a powerful London crime lord. He was in control over illegal boxing in London and liked to feed victims of his violent crimes to pigs. Near the end of his life, he bullied Irish gypsy boxer Mickey O’Neil into throwing a fight by burning his mother’s caravan, with her inside of it. Mickey responded by refusing to throw the fight and arranging for his friends to kill Brick Top’s henchmen and Brick Top himself.

Here is a list of some quotes from his (Character)

Brick Top: Do you know what “nemesis” means? A righteous infliction of retribution manifested by an appropriate agent. Personified in this case by an ‘orrible cunt… me.

Brick Top: In the quiet words of the Virgin Mary… come again?

Brick Top: Listen, you fucking fringe, if I throw a dog a bone, I don’t want to know if it tastes good or not. You stop me again whilst I’m walking, and I’ll cut your fucking Jacobs off.

Brick Top: Gimme that fucking shooter!
Pikey: I’ll give you your shooter, ya cunt ya!
Pikey: [Blam Blam]

Turkish: I can’t make him fight, can I?
Brick Top: You’re not much good to me alive, are you, Turkish?

Brick Top: You’re on thin fucking ice my pedigree chums, and I shall be under it when it breaks. Now, fuck off.

Brick Top: You’re always gonna have problems lifting a body in one piece. Apparently the best thing to do is cut up a corpse into six pieces and pile it all together.
Sol: Would someone mind telling me, who are you?
Brick Top: And when you got your six pieces, you gotta get rid of them, because it’s no good leaving it in the deep freeze for your mum to discover, now is it? Then I hear the best thing to do is feed them to pigs. You got to starve the pigs for a few days, then the sight of a chopped-up body will look like curry to a pisshead. You gotta shave the heads of your victims, and pull the teeth out for the sake of the piggies’ digestion. You could do this afterwards, of course, but you don’t want to go sievin’ through pig shit, now do you? They will go through bone like butter. You need at least sixteen pigs to finish the job in one sitting, so be wary of any man who keeps a pig farm. They will go through a body that weighs 200 pounds in about eight minutes. That means that a single pig can consume two pounds of uncooked flesh every minute. Hence the expression, “as greedy as a pig”.
Vinny: Well, thank you for that. That’s a great weight off me mind. Now, if you wouldn’t mind telling me who the fuck you are, apart from someone who feeds people to pigs of course?

Brick Top: [referring to Tommy] Turkish, put a lid on her.

[after cleaning out Turkish’s Safe]
Brick Top: He’s been a busy little bastard, that Turkish.
Errol: I think you’ve let him get away with enough already, Guv’nor.
Brick Top: It can get you in a lot of trouble, thinking, Errol, I shouldn’t do so much of it.

[looking at the video of Sol and Vinny, trapped in the foyer of the bookie’s by the security door]
Brick Top: Do you know these tits, Errol?
Errol: I know a lot of tits, Guv’nor. But I don’t know any quite as fucking stupid as these two.
Brick Top: John?
John: I can’t help, Guv.
[Tyrone pokes his head in the door]
Errol: Ah, Tyrone.
Errol, John: You silly fat bastard.

Brick Top: What do you think, Errol?
Errol: I think we should drip-dry them, Guv’nor, while we have the chance.
Brick Top: It was a rhetorical question, Errol. What have I told you about thinking?

Brick Top: Of course, fucking of course. I wasn’t asking, I was telling.

Brick Top: Are you taking the piss?

Errol: Looks like we’re in, guv’nor.
Brick Top: Goody gumdrops. Get us a cup of tea, would you, Errol?

[from a deleted scene]
Errol: You’re a dead man, Tony! You hear me? A fucking dead man!
Brick Top: Oi! What’s going on in there?
Errol: He’s pissed in my fucking pocket!
Brick Top: Oh, shut up, Errol. Get back in your fucking pram. Tony, ain’t you house-trained?

Turkish: [to Brick Top] You’ve still got your fight.
Brick Top: No, all bets are off at the bookies, you can’t change fighters. So no, I don’t have my fight do I? You fucking prat!

Brick Top: Pull your tongue out of my arsehole, Gary. Dogs do that. You’re not a dog, are ya Gary?
Gary: No, no I’m not.
Brick Top: But you do have all the characteristics of a dog, Gary. All except loyalty.
[Errol zaps Gary]
Turkish: [Voice over] It’s rumored that Brick Top’s favorite means of dispatch involves a stun gun, a plastic bag, a roll of tape, and a pack of hungry pigs.
Brick Top: [to Errol’s companion] You’re a ruthless little cunt, Liam, I’ll give you that. But I’ve got no time for grassers.
[John throws a plastic bag over Liam’s head and suffocates him]
Brick Top: Feed ’em to the pigs, Errol.
[to the two boxers, who are now staring in horror]
Brick Top: What the fuck are you two looking at?

Brick Top: Do you know what nemesis means? A righteous infliction of retribution manifested by an appropriate agent, personified in this case by a ‘orrible cunt, me.