One of America’s most famous criminals, Jesse James, is shot to death by fellow gang member Bob Ford, who betrayed James for reward money. For 16 years, Jesse and his brother, Frank, committed robberies and murders throughout the Midwest. Detective magazines and pulp novels glamorized the James gang, turning them into mythical Robin Hoods who were driven to crime by unethical landowners and bankers. In reality, Jesse James was a ruthless killer who stole only for himself.

The teenage James brothers joined up with southern guerrilla leaders when the Civil War broke out. Both participated in massacres of settlers and troops affiliated with the North. After the war was over, the quiet farming lifeof the James brothers’ youthno longer seemed enticing, and the two turned to crime. Jesse’s first bank robbery occurred on February 13, 1866, in Liberty, Missouri.

Over the next couple of years, the James brothers became the suspects in several bank robberies throughout western Missouri. However, locals were sympathetic to ex-southern guerrillas and vouched for the brothers. Throughout the late 1860s and early 1870s, the James gang robbed only a couple banks a year, otherwise keeping a low profile.

In 1873, the James ganggot into the train robbery game. During one such robbery, the gang declined to take any money or valuables from southerners. The train robberies brought out the Pinkerton Detective Agency, employed to bring the James gang to justice. However, the Pinkerton operatives’ botched attempt to kill James left a woman and her child injured and elicited public sympathy for Jesse and Frank James.

The James gang suffered a setback in 1876 when they raided the town of Northfield, Minnesota. The Younger brothers, cousins of the James brothers, were shot and wounded during the brazen midday robbery. After running off in a different direction from Jesse and Frank, the Younger brothers were captured by a large posse and later sentenced to life in prison. Jesse and Frank, the only members of the gang to escape successfully, headed to Tennessee to hide out.

After spending a few quiet years farming, Jesse organized a new gang. Charlie and Robert Ford were on the fringe of the new gang, but they disliked Jesse intensely and decided to kill him for the reward money. On April 3, while Jesse’s mother made breakfast, the new gang met to hear Jesse’s plan for the next robbery. When Jesse turned his back to adjust a picture on the wall, Bob Ford shot him several times in the back. 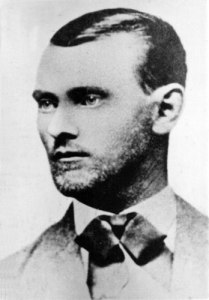 Frank and Jesse James were both legends in their own time, though Jesse is better remembered today because of his more dramatically violent death. The two Missouri brothers drifted into a life of crime after serving in Confederate guerilla forces during the Civil War. They began robbing banks in 1866, and their bold and impudent style won them a good measure of popular admiration. Once Jesse stopped to tell a crowd of townspeople gathered for a political speech that he thought something might be wrong at the bank he and Frank had just robbed. On another occasion, they staged an audacious hold-up of a Kansas City fair box office in the middle of a crowd of 10,000 people.

In an era of lingering sectional hatred and increasing public dislike for large corporate railroads and banks, some Americans began to see the James brothers as heroes, modern-day Robin Hoods who stole from the rich and gave to the poor. Newspapers, eager to increase their readership, contributed to this mythic view of the brothers. In reality, the James brothers were brutal criminals who willingly killed innocent victims in their pursuit of money, but misguided public sympathy for the men was so great that the Missouri state legislature at one point nearly approved a measure granting amnesty to the entire James gang.

After the brothers murdered two innocent men during an 1881 train robbery, though, the state of Missouri came to its senses and offered a reward of $5,000 each for the capture of Jesse and Frank. Shot down for reward money in 1882 by one of his own gang members, Jesse achieved a false but enduring reputation as a martyr in the cause of the common people against powerful interests. One Kansas City newspaper mournfully reported his death in a story headlined, “GOODBYE JESSE.”

Had Frank suffered the same fate, no doubt he too would have achieved martyrdom and been the subject of popular songs like the “Ballad of Jesse James.” However, Frank wisely preferred long life to martyrdom, and he turned himself in a few months after his brother was murdered. Prosecutors were unable to convince juries that Frank was a criminal, and he was declared a free man after avoiding conviction at three separate trials in Missouri and Alabama.

Entering middle age and having grown weary of the criminal life, Frank James was not so foolish as to tempt fate and the watchful eyes of Missouri law officers by resuming his old ways. For the next 30 years, he lived an honest and peaceful existence, working as a race starter at county fairs, a theater doorman, and a star attraction in traveling theater companies. In 1903, he joined forces with his old criminal partner Cole Younger to form the James-Younger Wild West Show. Frank retired to his family’s old farm in Missouri, where he died at the age of 72 in 1915.

The trial of Frank James begins in Gallatin, Missouri. It was held in the city opera house in order to accommodate the crowds of spectators.

After having robbed dozens of banks and trains over nearly two decades, Frank James finally turned himself in October 1882. Discouraged by the murder of his brother Jesse the previous spring, Frank feared it was only a matter of time before someone also shot him in the back for reward money. He decided to try his chances with the courts, hoping that his considerably public popularity would win him a short sentence.

Frank’s trial went even better than he had hoped. Although Frank and Jesse James and their gang of desperados had killed many people, the majority of Missourians saw them as heroes who took money from ruthless bank and railroad companies and redistributed it to the poor. The state prosecutor had a difficult time finding jurors who were not prejudiced in Frank’s favor. Looking at the panel of potential jurors, he concluded, “The verdict of the jury that is being selected is already written.”

After the trial began, several prominent witnesses testified to Frank’s character. General Joseph O. Shelby, who had known him during his days as a Civil War guerilla, encouraged the jurors to see Frank James as a defender of the South against corrupt big businesses from the North. When asked to identify Frank in the courtroom, the distinguished general exclaimed: “Where is my old friend and comrade in arms? Ah, there I see him! Allow me, I wish to shake hands with my fellow soldier who fought by my side for Southern rights!”

Rural Missourians were unwilling to convict the legendary Frank James. The jury found him not guilty. The states of Alabama and Missouri tried to convict him twice more, on charges of armed robbery, with no success. In late 1883, Frank James became a free man. He lived quietly for 32 more years. The only shots he ever fired again were from starter pistols at county racetracks, one of the handful of odd jobs he took to earn a living. He died at his family home in Missouri in 1915 at the age of 72.