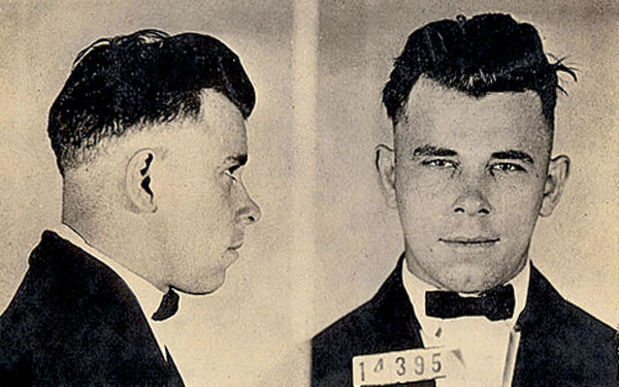 Dillinger was born in Indianapolis but spent his adolescence on a farm in nearby Mooresville. He joined the navy in 1923 and he served on the USS Utah but deserted after only a few months. In September 1924, caught in the foiled holdup of a Mooresville grocer, he served much of the next decade (1924–33) in Indiana state prisons. While in prison he learned the craft of bank robbery from tough professionals. Upon parole on May 22, 1933, he turned his knowledge to profit, taking (with one to four confederates) five Indiana and Ohio banks in four months and gaining his first notoriety as a daring, leaping, sharply dressed gunman.

Born into a middle-class family on June 22, 1903, in Indianapolis, Indiana, Dillinger experienced tragedy at the age of four when his mother died. Shortly thereafter, his father moved the family to a small farm in Mooresville, Indiana; he soon remarried. Dillinger’s father had several children with his new wife, and Dillinger’s upbringing fell mainly to his older sister. Reportedly, Dillinger disliked his stepmother and endured physical punishment from his harsh father. In 1923, Dillinger joined the Navy but grew tired of it quickly, ultimately deserting. He returned to Indiana and told friends and family that he had been discharged. Shortly after his return, he married 17-year-old Beryl Hovius. He was 21 at the time. The marriage lasted a mere two years.

Introduction to Crime
Following the end of his marriage, Dillinger moved to Indianapolis and met Ed Singleton, a former convict, while working at a grocery store. Young and impressionable, Dillinger was taken under Singleton’s wing and accompanied him as he committed his first heist: a botched grocery store hold-up. After fighting with the owner during the robbery and knocking him unconscious, Dillinger fled the scene, thinking the owner was dead. Upon hearing Dillinger’s gun go off during the brawl, Singleton panicked and drove away with the getaway car, stranding Dillinger. With no legal guidance, Dillinger pled guilty and received a 10-year prison sentence. Singleton, also arrested, received just 5 years. Dillinger used his time in jail to strategize and plan his revenge against the justice system. With one year taken off his sentence for good behavior, he was released on parole in 1933, four years after the start of the Great Depression.
While in jail, Dillinger learned from seasoned bank robbers, preparing for a future in crime. Within a week of leaving prison he assembled a gang and began executing plans to send arms to his friends at Indiana State Prison for escape. However, on the day of the planned prison break, September 22, 1933, police, on a tip, raided the old house where Dillinger and his newly choreographed gang had set up residence. Dillinger was arrested again. He was immediately transferred to Allen County Jail in Lima, Ohio. The arrest only proved Dillinger’s loyalty to his friends and they were quick to return the favor. Dressed as police officers, Dillinger’s cronies snuck into the jail and broke him out.

Bank Robberies
All told, Dillinger racked up more than $300,000 throughout his bank-robbing career. Among the banks he robbed were:

The East Chicago robbery on January 15, 1934 is particularly noteworthy. It was at this heist that Dillinger shot a police officer, thereby adding murder to his growing list of charges.

Jail Time
Shortly after the East Chicago robbery, a fire broke out in the hotel where Dillinger and his friends were staying in Tucson, Arizona. Tipped off again, police found and arrested Dillinger. Allowing no room for error this round, the police had him carefully secured and sent to Indiana by aircraft, where he could be tried for murder (he was only guilty of theft in Arizona). He arrived at Chicago’s municipal airport on January 23, 1934, where he was greeted by throngs of reporters eager to spread word of the infamous criminal’s capture. At this point in time, Dillinger was already a public sensation, due to the media frenzy surrounding him. Authorities placed Dillinger under high security at the jail in Crown Point, Indiana, and treated him as though he had all due intent to try another escape. However, as things settled down, the armed patrol guards on the streets surrounding the prison were dismissed, and indoor guards became more lax. Despite having six armed guards between his cell and the outside world, the leniency of prison regulations permitted Dillinger to spend hours in his cell carving a fake gun out of an old piece of washboard using just a few razor-blades. A replica of his creation is on display in the museum. Dillinger used this gun to escape by taking one hostage and forcing him “at gunpoint” to lead him out of the prison. Dillinger then managed to hijack a car from a nearby alley, and before the prison knew what had happened, Dillinger was on the road again with two hostages in tow. It was then that Dillinger made the fatal mistake of crossing state borders in a stolen car, bringing his crimes under FBI jurisdiction.

Escape at Little Bohemia Lodge
At the time of Dillinger’s escape, J. Edgar Hoover was working on implementing a more credible, reformed FBI and developing a new strategy of assigning “special agents” to cases. Hoover appointed a special squad, led by Agent Melvin Purvis, specifically to track down John Dillinger. Constantly on the move after his escape, Dillinger drove across the Midwest trying to avoid the FBI. Along the way, Dillinger teamed up with his old girlfriend, Billie Frechette. After several close calls with the cops and losing Frechette, Dillinger set up camp at Little Bohemia Lodge, just outside the remote town of Mercer, Wisconsin, hiding out with a cadre of criminals, including “Babyface” Nelson, Homer Van Meter, and Tommy Carroll. Alerted by concerned residents and the inn’s owners, the FBI swarmed the house, but again, Dillinger managed to slip away. At this point, Dillinger concluded that he had simply become too recognizable. Seeking a better disguise, he decided to undergo major plastic surgery. It was at this time that he was christened with the nickname “Snake Eyes.” The surgery was able to change everything except his devious eyes.

Following Dillinger’s last staged bank robbery in South Bend, Indiana, where he killed another policeman, Hoover made the unprecedented step of placing a $10,000 reward on Dillinger’s head. About a month after the announcement, a friend of Dillinger’s, an illegal immigrant working at a brothel under the stage name Ana Sage, tipped off the police. She was under the impression that the FBI would prevent her from deportation if she helped them. Sage told officials that Dillinger planned to attend a film at the Biograph Theater in Chicago. Armed agents waited outside of the theater waiting for Ana’s signal (a red dress).

“Dillinger gave one hunted look about him, and attempted to run up an alley, where several of my men were waiting. As he ran, he drew an automatic pistol from his pocket, although I have always been told that he carried his weapons in his waist band.”

“As his hand came up with the gun in it, several shots were fired by my men, before he could fire. He dropped, fatally wounded. I had hoped to take him alive, but I was afraid that he would resist to the last.

Dillinger was shot through the back of the neck, the bullet coming out just under the right eye, another bullet crashed through his left breast. The latter would not have killed him, the bullet through the neck being fatal.

A third bullet was found in the left breast, it had passed through the tip of the heart. The breast wounds were two inches apart.”

At the Cook County Morgue, attempts were made to identify Dillinger by his fingerprints, but the ends of his fingers were scarred, apparently having been treated with acid. Purvis had definitely identified him, before the body was taken to the morgue.

Examination at the morgue disclosed a recent wound in Dillinger’s chest about two inches long, which had just healed, and it was believed he had received it in a recent bank robbery raid. Purvis said his last known raid was the robbery of the Peoples Trust and Savings Bank at South Bend.

Dillinger’s hair was died coal black and cut very short. His eyebrows appeared to have been plucked to a fine line. He had a small black mustache.

Hundreds of spectators crowded, pushed and jostled after the bleeding body of the outlaw was removed.

Souvenir hunters madly dipped newspapers in the blood that stained the pavement. Handkerchiefs were whipped out and used to mop up the blood.

Traffic soon became so jammed that street cars were re-routed, police lines established and traffic blocked out of the area.

Frustrated souvenir hunters hurried to the county morgue, police estimated 2,000 persons rushed to the morgue for a view of the body, and shouted and fought with police to gain entrance. Stringent lines were drawn there also.

Dillinger did not have a chance to get away.

“Every back door both ways down the street was watched,” the Federal chief said.

Two agents were across the street in a restaurant; two were in a garage two doors from the theatre, and two on the sidewalk, in front of the theatre.