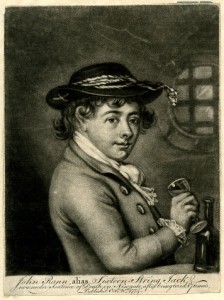 John Rann, otherwise known as “Sixteen String Jack”, was a notorious highwayman in the mid 18th century. On September 26, 1774, John stole from his last victim, and was found guilty and sentenced to death for his crime. Known as an eccentric character who was often dressed fashionably and who openly boasted about his crimes, John wasn’t your usual thief. Rann’s trial related to many aspects of the 18th century such as status, law and gender. People today are still openly robbed on streets and sidewalks, and while they may not be known as highwaymen today, these criminals are essentially the same.

The man in question who was robbed was Dr. William Bell. During the evening of September 26th, 1774, Bell claims that two men on horses caught up to him on the street and demanded all his money. One of the men threatened to shoot Bell if he didn’t comply by saying, “he immediately said your money; I said, my money? he immediately answered yes, or I will blow your brain out” so he handed over what money he had and his watch as well. Bell was later called down to Bow Street (where a group called the Bow Street Runners ran their operations; essentially an early form of a police force) to identify some prisoners. It proved difficult however, because Rann was known for his eccentric clothing and the robber Bell had met was dressed very dirty and grimy, very unlike Rann. Bell found Rann and Collier looked familiar and accused them of the crime. As he said in court, ‘I did in the progress of my survey see such looks and marks that I do declare that I firmly believe that John Rann is the identical man that robbed me.’”

The second part of this story is that of Eleanor Roache (who was an accomplice and mistress to Rann) and her servant Christian Stewart. Rann left the watch in Roache’s care to pawn off for money. The pawnbroker John Cordy did not believe the ladies story as he described, “the man must come or I cannot lend you money upon it” when they tried pawning the watch and he later took some men to apprehend the women at their house. They found at the house a pair of wet and dirty boots recently used and had a local watchmaker identify the watch as belonging to Mr. Bell. The town constable waited at the house until Rann and Collier came back, and they were apprehended as well.

Further evidence was identified when a man by the name of William Hill (who was a postilion for Princess Amelia) spotted Rann just before the robbery took place. He was able to identify Rann and an accomplice by their facial features and dirty and wet clothing they were wearing, as he testified, “I know Rann by sight very well”. Lastly, a neighbour who lived close to Roache’s house noted that she saw both Rann and Collier selling their horses after the robbery.

Rann defended that he had never seen Mr. Bell before, as he stated in his defence, “I knows no more of it than a child does unborn, nor I never seed Mr. Bell before he came to Sir John’s” and had committed no crime “They have said false things to you; I know no more of it if I was to suffer death to-morrow”. He also claimed he did not have any relationship with Eleanor Roache and accused his neighbor of lying, “This woman wants to swear my life away for an affair I know nothing of”. In Roache’s defense she claimed not to know the men either, or that the watch left to her was stolen by saying, “These are not the two men that gave me the watch”, “if I had known the watch was stolen I should not have offered it to a pawnbroker I had dealt with a great while”. Miss Stewart claimed she was Roache’s servant and was unaware of any wrongdoing of who Rann and Collier were. In the end Rann and Collier were sentenced to death (Collier was later pardoned however), Roache to fourteen years (transported to another colony in America) and Stewart was acquitted of any crime.

Rann was a notorious figure because of his personality and clothing. His nickname of Sixteen String Jack came from the fact that he wore, “breeches with eight silk strings or tassels attached to each knee. The strings were threaded into the eyelet holes, where the breeches were gathered at the knee.” Rann was also known for getting out of trouble with the law, having six previous cases dismissed. This is because Rann was difficult for witnesses to identify. Rann often wore dirty and grimy clothes when he committed crimes, but colorful and extravagant clothing in public. This confused people because he appeared completely different when committing crimes. Rann often boasted about his life of crime to others and was very easy to recognize in the public because of his appearance.

Even though Rann was sentenced to death, he found time to host a party for him and his seven female guests in his cell before his hanging. He also wore his best clothes on the day of his execution, and performed a jig right before his hanging at Tyburn (sound familiar?). A very eccentric figure for sure, Rann was not your usual type of criminal.

This trial paints an interesting picture of the 18th century. Clothing was very unique, elegant, luxurious and intricate during this time. Many people of status swore by the outfits they wore as a sign of status. Rann exploited this sensationalism of clothing as a means of treachery. In the public eye, John Rann was a prominent figure because of his eccentric clothing and unique look. It is because of this persona that he got out of so many crimes due to looking completely different to those he stole from.

As I mentioned earlier, there was a group of lawmen forming during this time known as the Bow Street Runners. This group essentially were the 18th century version of a police force. The Runners were the ones who caught Rann and his mistress, and brought them to justice. The Bow Street Runners revealed to me that a system of catching and apprehending criminals for the government was starting. It seemed to me an early beginning on how to police a city and control the crime rate effectively.

Another factor is the role of 18th century gender and crime involved in the case. Even though Rann was the main and most prominent figure in the trial, he did have accomplices. One such accomplice being Eleanor Roache. Roache was not only Rann’s mistress, but also sold his stolen goods to unaware buyers. The two worked as a team during his crime spree, and both fell into 18th century gender roles. While men were more likely to fall in the pattern of the more physical and threatening aspects of a crime, the women were more likely to commit theft or, in this case, the selling of stolen goods. This system worked well because Roache was essentially the middleman for Rann’s crimes and both profited from their treachery.

The case also shares many similarities to our modern age as well. John Rann was an eccentric person, who openly announced his crimes to others, and escaped the law numerous times. In today’s world, we know of many famous or notorious people who have broken the law, but have never been committed for their crimes. This could be because their fame protects them, or they have friends in high places. In criminal circles today there is still the camaraderie of bragging about committed offenses. In these circles accomplices and friends will often refuse to rat out their friends.

Rann was known as a highwayman. Highwaymen were men who stole from those traveling along the roads either by horse or foot. These men were notorious thieves in the 18th century who preyed on the weak and vulnerable. This still happens today all over the world. Daily, numerous people are robbed on the streets or in alleyways, again usually on those traveling from place to place. A couple of modern example of this would be pickpockets on a busy tourist street or muggers in dark alleyways. Like Highwayman, these criminals prey on those traveling and use fear as a means for theft (maybe without the charisma or bravado though). This behavior of taking advantage of others with threats and fear has continued throughout the ages.

Another way in which this crime relates to modern times is the use of a pawnshop as a means to sell stolen goods. Roache was known as a fence (buys stolen goods knowingly and later resells them, acting as a middleman). There are many instances today of petty thieves breaking into cars or stealing misplaced backpacks and scalping off the goods to local pawnshops. Even using a middleman to hide your tracks from a crime as a means to make dirty money is a common practice for criminals, both present and past.

Sixteen String Jack bit off more than he could chew with his last robbery. Due to eyewitnesses, evidence and the Bow Street Runners, Rann met his final match. Rann’s eccentric clothing and suave personality were both for crime and social status. His trial showcased many aspects of 18th century issues such as law and gender. Modern world issues, such as muggings and protective status, are still as prevalent today, as they were in the past. Rann may have performed his last jig before his death, but his story still lives on today. 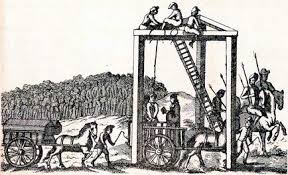 On November 3 1783 a rather inglorious tradition ended when John Austin, a highwayman, was executed at Tyburn, the last of more than 1200 to meet their end there since the first recorded Tyburn hanging in 1196. At times large numbers of prisoners were executed en masse, for example in June 1649 24 died together, the volume accommodated by the famous Tyburn Tree, a construction like a giant three-legged stool without a seat.
Executions at Tyburn had been big business for what was for centuries a village, though by the time Austin was killed it had been swallowed up in the urban sprawl of the 18th century. Apprentices were given holidays to witness the criminals die; stands would be erected for ‘popular’ executions; crowds of several thousand regularly gathered in a festival mood to see the spectacle, with food-sellers and in later years leaflet-printers doing well from them.
The Tyburn Tree had, however, already gone long before Austin’s day, as the good people moving into the area objected to the grisly device – doubtless it was hitting their property values. Austin had murdered a poor man named John Spicer somewhere on the road in Bethnal Green , and like so many others before him was taken slowly to the crossroads site of the gallows – in his case a portable device. The last words with which he is credited seem to fit ill in the mouth of a lowly criminal, asking for salvation and begging for the prayers of those present. It took him 10 minutes to die, strangled slowly by the rope.
For the curious, and those wanting to test the atmosphere, the crossroads execution site is commemorated at the junction of Bayswater Road and Edgware Road, three small brass triangles set in the paving of a traffic island there.

Check out this little link for more on The History of Tyburn  http://www.wikiwand.com/en/Tyburn