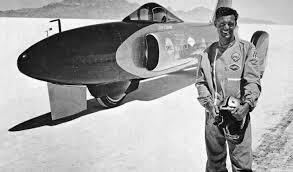 On November 15, 1965 at the Bonneville Salt Flats in Utah, 28-year-old Californian Craig Breedlove sets a new land-speed record–600.601 miles an hour–in his car, the Spirit of America, which cost $250,000 and was powered by a surplus engine from a Navy jet. He actually drove across the desert twice that day, since international world-record rules require a car to make two timed one-mile runs in one hour. (Officials log the average speed of the two trips.) During his first trip, Breedlove traveled at a rate of 593.178 mph; during his second, the first time any person had officially gone faster than 600 mph, he traveled at a rate of 608.201 mph. “That 600 is about a thousand times better than 599,” he said afterward. “Boy, it’s a great feeling.”

For nearly 20 years, the fastest man on land had been England’s John Cobb, who had driven his internal-combustion Railton Special a record 394.2 mph at the salt flats in 1947. (Bonneville was a popular place for drag races and speed tests because, unlike concrete, its salt surface absorbed plenty of water, which kept the track cool.) But in October 1963, Breedlove piloted a three-wheeled version of the Spirit of America to a new record: 407.45 mph.

Then, the floodgates opened: For the next two years, Breedlove and two other racers–Tom Green and Art Arfons, who drove a home-built machine that he called the Green Monster–passed the land-speed title around like a hot potato. They broke the record six times in one year, something no one had done since 1904.

In October 1964, Breedlove became the first man to go faster than 500 mph, and he nearly died in the process: The Spirit of America’s parachute–the machine’s braking mechanism–snapped off at the end of the mile, and Breedlove careened off the track, through a stand of telephone poles, and into a salt pond. He escaped through the car’s rooftop hatch with a new record: 526.28 mph. Arfons shattered that record a year later, but his glory was fleeting. Just over a week later, Breedlove and his jet car zoomed past the 600 mph mark.

Arfons vowed that he’d be back, but he’d damaged the Green Monster during his record-breaking run and could never quite fix it. Instead, Breedlove held the title for nearly five years, until Gary Gabelich coaxed his rocket-powered Blue Flame to an average speed of 622.4 mph. The current land-speed record, set by Britain’s Andy Green in 1997, is 766.069 mph–faster than the speed of sound.